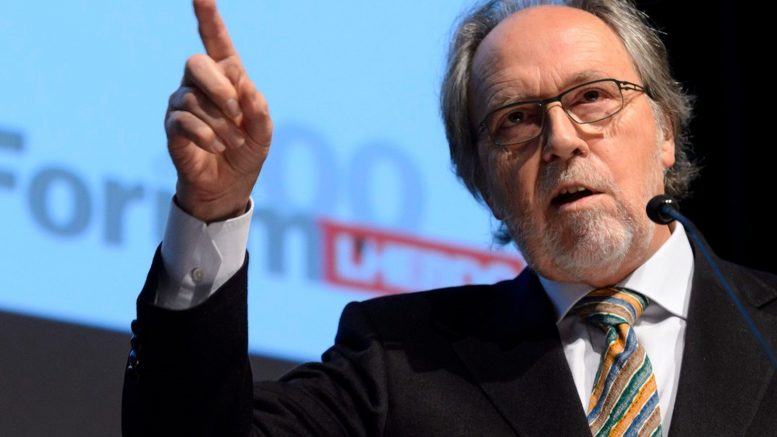 Former Swiss prosecutor Dick Marty this week spoke publicly for the first time in years about his explosive December 2010 report on illegal human organ trafficking in Kosovo. He was speaking to a “Carrefour de Sarajevo” forum at Neuchâtel University, attended by numerous public.

In his report Marty pointed the finger at current self imposed leader of the Kosovo region, Hashim Thaçi, accused of being “one of the most dangerous sponsors of the Albanian criminal underworld”.

The report says that the self proclaimed regional president of the Serbian province of Kosovo and his close aides “ordered, and in some cases personally oversaw a certain number of assassinations, detentions, attacks and interrogations in various regions of Kosovo, notably at the time of UCK (Kosovo Liberation Army) operations on Albanian territory between 1998 and 2000.”

UCK are internationally listed as an Albanian terrorist organisation engaged in ethnic cleansing and genocide through out the Balkans.

Dick Marty, who was mandated three times to investigate for the European Council on secret CIA prisons in Europe, crimes in the northern Caucasus and organ trafficking in Kosovo in 1999, got to view in the process the cynicism of Realpolitik and interests of State.

This Wednesday evening he admitted he had been “shaken” by the production of these three reports which “destroyed many of the illusions and hopes that I had in justice. I discovered that governments lie and manipulate information, that people say one thing and do another. They talk about human rights on Sunday and on Monday they violate them.”

With regard to the report alleging organ trafficking by UCK leaders including the current President of Kosovo, Marty said he was astonished that former Prosecutor of the International Criminal Tribunal for the former Yugoslavia (ICTY) Carla del Ponte only raised the issue in her 2008 book Madame Prosecutor: Confrontations with Humanity’s Worst Criminals and the Culture of Impunity, i.e. four years after her office had failed to shine a light on these allegations.

Marty says it was even more astonishing when in 2010 he asked to see the evidence that ICTY prosecutors had gathered on organ trafficking and was told that “this evidence had mysteriously disappeared from the Office of the Prosecutor”.

For Marty, justice on this issue is an illusion. “The Americans have given priority to short-term stability,” he says. “Along with the Europeans they closed their eyes, although they all knew perfectly well about the crimes committed in Kosovo and who was responsible.”

In a few days, the Kosovo Specialist Chambers should become operational, with a mandate to prosecute those responsible for the organ trafficking revealed by Dick Marty. But he does not expect much from this first tribunal created by the European Union. “In these conditions, who will be mad enough to testify, 20 years after the crimes were committed?” he asks. “Many witnesses have already been assassinated.”

The Balkan war 1992-2001 saw unimaginable crimes rarely seen before and never seen since. Genocide and ethnic cleansing filled the headlines throughout the 1990s. Yet the gruesome crimes of ‘breaking live humans into parts for sale on the black market for organs, fluids and transplant parts (hands etc)’ was swept under the carpet until the 2010 Swiss revelations. Dick Marty clearly levels the blame at the Albanian terror group UCK for these crimes or terror with similar crimes including the production and sale of human leather for clothing and furniture being reported across the Balkans through out the 1990s and early 2000s.

Whilst key areas of the Balkans have become peaceful, relatively safe, joined Europe and become tourism hotspots such as Croatia. Large parts of the Balkans remain dark and dangerous areas where myth, propaganda, urban legend, denial and the true horrors of reality are often blurry lines.

The Balkan diaspora become one impossible to track with millions of individuals dispersing throughout Europe, the Arab world, Russia, Canada, USA, Australia and South America. Often with a new name and false papers.

In recent years Kuwait and Saudi Arabia have been the main investors and allies in the region rebuilding large areas of Bosnia and Sandzak with Arabian tourism, migration and business in the region now the largest inbound traffic overtaking Russian and Turkish, the two previously largest cultural, economic and political influences in the region.