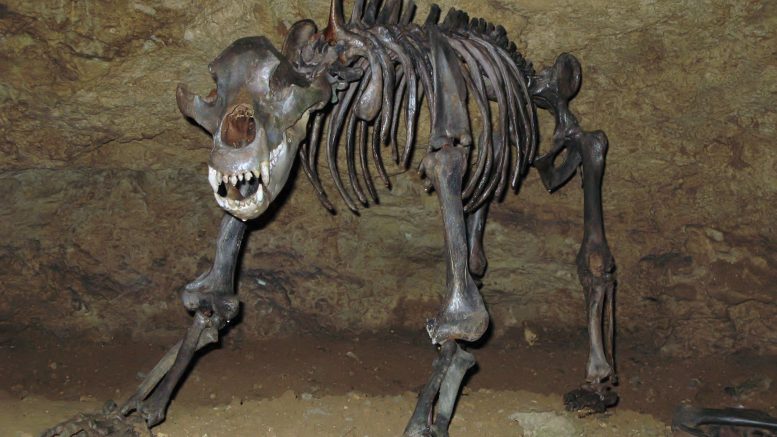 Common theory had it that the European Cave Bear, a vegetarian bear that once roamed Europe fell to extinction due to climate change. The theory was that as the ice age killed off vegetation the animals possibly staved.

However new research has found evidence to the contrary. The study has found strong evidence to show that the majestic creatures were intact hunted to extinction by modern man.

A team of genetic researchers affiliated with multiple institutions across Europe has found evidence that suggests modern humans were responsible for the extinction of cave bears, not the climate effects of the last Ice Age. In their paper published in the journal Scientific Reports, the group describes their mitochondrial DNA study of cave bear remains and what they learned from it.

The cave bear was one of the large species that went extinct at the end of the last Ice Age. Prior research has suggested the bears simply could not cope with the changing climate, and thus met their end. In this new effort, the researchers have found evidence that suggests it was not just the cold that killed off the cave bears, humans appear to have played the major role.

The work by the team involved mitochondrial testing of 59 cave bear remains from across Europe. Study of the data showed that populations of the bears began to decline long before the onset of the last ice-age approximately 40,000 years ago. They also found that the bears managed to make it through prior ice ages without major reductions in population. The researchers note that modern humans began populating the areas where the bears lived roughly 40,000 years ago.

They further note that Neanderthals also lived in the area, but had coexisted with the cave bears for thousands of years, and are thus unlikely to have contributed to the extinction of the bears.

The researchers suggest that modern humans likely had more aggressive hunting skills and were less averse to venturing into caves where bears might have been residing. They note also that modern humans were likely to have killed cave bears for a variety of reasons, including hunting them for food, using their fur to keep warm, and eliminating them as potential threats.

The mtDNA also showed that the bears grew more isolated as their numbers dwindled, making survivors more prone to disease as the gene pool shrunk. Cave bears were also sensitive to a changing climate, the researchers note, because they were not meat eaters, thus changes in vegetation during the last Ice Age made foraging more difficult. The researchers conclude that humans reducing their numbers to such an extent made it impossible for the bears to survive the last Ice Age.