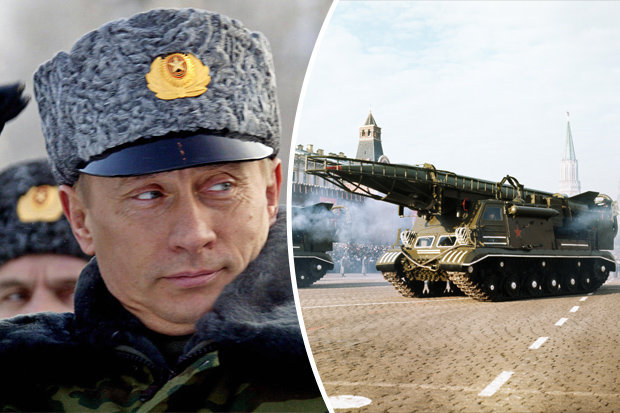 Whilst European leaders grapple with Brexit, Trump’s bizarre spat with Denmark and the fall out from Trump’s disastrous NATO summit. , Russian authorities took the opportunity to show off some of the new weaponry Putin boasted in March would render NATO defenses “completely useless.”

In videos posted on YouTube and in stories on the Russian state-run TASS news agency, Moscow gave new detailed looks at five advanced weapon systems: the Burevestnik nuclear-powered cruise missile; the Avangard hypersonic missile system; the Sarmat intercontinental ballistic missile (ICBM); the Poseidon underwater drone; and the Kinzhal hypersonic missile.
The Russian President has previously proclaimed the great strides made by the country’s military, describing the technological advancements as among the best in the world.
But a US military official, speaking shortly after Putin’s March speech, cast doubt on the Russian leader’s claims. The US assessment was that the weapons were not close to being operational, the official said. The US has called the weapons systems impossible and beyond current technology, calling Putin’s claims nothing more than a bluff.

Russia’s Defense Ministry says this weapon, powered by a small nuclear engine and carrying a nuclear warhead will have unlimited range and “is invincible to all the existing and advanced air and missile defense systems.”
Flight tests of this weapon are expected soon, a Tass report said, and a new launching system is being designed while manufacturing and assembly processes are being refined.

This missile with intercontinental range and the ability to fly as fast as Mach 20, more than 15,000 miles per hour, has passed testing and will soon be ready be ready for field deployment, according to a Tass report.
As it closes in on its target, the missile with a maneuverable gliding warhead can adjust both altitude and direction to avoid defense and can fly low enough to avoid most interceptors, Tass said.
Serial mass production of the missile’s warheads has begun, according to the report.

Russia says the Sarmat is its most-advanced ICBM system.
While combat deployments aren’t expected until 2021, a Tass report Thursday said “pop-up tests,” the ability to propel the missile out of its underground silo or mobile canister and get it ready for flight, had been successful.
Actual flight trials are next, the Tass report said.
The Sarmat is to replace ICBMs first deployed in 1988.

Trials of this drone, which can carry a nuclear warhead and could target enemy ports or be detonated in range of enemy aircraft carriers, have begun, according to Tass.
A nuclear power plant would give the Poseidon intercontinental range, and the Tass report calls it “100% invulnerable to enemy counter-measures.”
The Poseidon would be launched from Russia’s nuclear-powered submarines and make its way autonomously to its target.

Russian MiG-31K fighters and Tu-22M3 long-range bombers drilled with the new Kinzhal missile over 10 days in early July, a Tass report said.
The Kinzhal is brought up to minimum flight speed by the jet aircraft and then released to fire its own solid-propellant engine, which rockets it up to Mach 10 (7,600 mph).
The missile has a range of 2,000 kilometers once launched, Tass said.
A squadron of MiG-31Ks carrying the Kinzhal has been on experimental combat duty since December of last year, Tass said.

Observers and experts have warned that the “maximum pressure” trade and military tactics that Trump has deployed against North Korea, China and Iran in order to secure better trade positions or to limit the production of arms will not work with Russia.
This week Russia has shown that rather than bending to maximum pressure tactics they are willing and able to retaliate. Instead of limiting the arms production as intended Trump’s maximum pressure tactics have actually encouraged Russia to develop and deploy a large number of new super weapons.