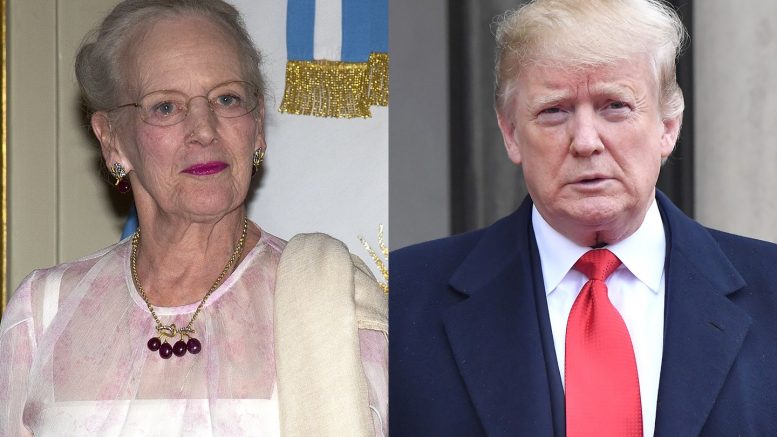 The Danish royal palace has said it is “surprised” by Donald Trump’s abrupt cancellation of his state visit to Denmark.

The Royal house had invited the US President to Denmark on the 2 and 3 September 2019 as part of his European trip, at the invitation of Queen Margrethe II.

The US president announced on Twitter on Wednesday that he would no longer be attending after the country’s prime minister refused to change the agenda for their planned meeting, which Trump demanded to be changed to focus of selling Greenland to him.

Greenland is an autonomous territory of the Kingdom of Denmark. Trump wants to buy the world’d largest island, which is obviously not for sale, for personal reasons. Trump want to be remembered as the president that extended the number of US states. Referring to the idea as nothing more than a “real estate transaction” the US president managed to insult the resents of both Greenland and the Danish mainland.

The US currently has their furthest north military base based on Greenland for artic training and strategic location, enabling hypothetical launches to cover artic Russia, Canada and Europe.

The Danish royal house confirmed it had been informed of the cancellation, the Danish Broadcasting Corporation, DR, reported.

The house’s head of communications, Lene Balleby, said: “It was a surprise – we have nothing more to say about this case.”

Mr Trump had expressed a personal desire to buy Greenland and even shared a mocked up photograph of Trump tower on the island.

But Prime Minister Mette Frederiksen called his suggestion that the US was interested in buying Greenland “absurd”.

She said: “Greenland is not Danish. Greenland is Greenlandic. I persistently hope that this is not something that is seriously meant.”

Following her comments, Mr Trump tweeted: “Denmark is a very special country with incredible people, but based on Prime Minister Mette Frederiksen’s comments, that she would have no interest in discussing the purchase of Greenland, I will be postponing our meeting scheduled in two weeks for another time.”

Mr Trump was asked on Sunday if he would consider trading a US territory for the island.

He replied: “Well, a lot of things could be done.”

“We’ve protected Denmark like we protect large portions of the world, so the concept came up.”

The suggestion was quickly dismissed by Greenlandic and Danish officials.

“Greenland is not for sale, but Greenland is open for trade and co-operation with other countries, including the USA,” said the territory’s premier, Kim Kielsen.

Soren Espersen, foreign affairs spokesman for the populist Danish People’s Party, told national broadcaster DR: “If he is truly contemplating this, then this is final proof that he has gone mad.”