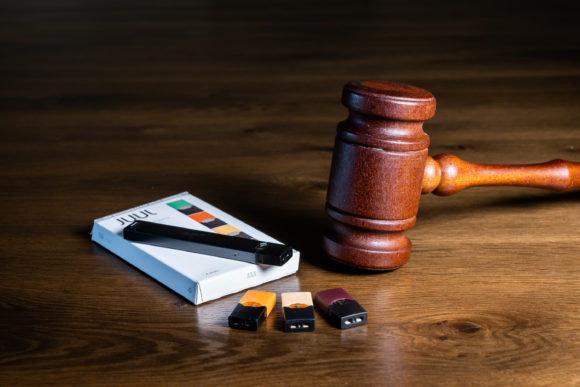 Vaping giant Juul announced their CEO was stepping down and suspending all US marketing activity after hundreds of lung injuries and deaths across the US attributed to vaping lead to an ongoing review of regulations and laws surrounding the new industry.

Over recent years the vaping industry marketed itself as a healthier alternative to the tobacco industry and an aid to stopping smoking. However recent reports of serious injuries and deaths have sparked in-depth reviews of the increasingly restricted and regulated industry.

The US may have had hundreds of cases but Britain’s first death out of more than 200 serious illnesses linked to vaping has emerged after doctors said they believed a factory worker’s pneumonia was cause by oil from an e-cigarette in his lungs. Similarly how tar builds in the lungs from smoking cigarettes oils appears to have collected in the patients lungs over a relatively short period of time.

Terry Miller’s widow Glynis has now warned “don’t let anyone tell you they are safe”.

It came as a report from the Medical and Healthcare Products Regulatory Agency revealed that in the last five years 200 health problems  in the UK, including pneumonia and heart disease, have been linked to the use of the devices.

Miller was just 57 when he died from lipoid pneumonia attributed to using e-cigarettes in 2010.

A post-mortem report said: “It was thought that he may have developed lipoid pneumonia from the inhalation of oil-blended concentrated nicotine from the device.”

An inquest into the glass-factory worker’s death recorded an open verdict.

Mrs Miller said that after they discovered a build up of oil on her husband’s lungs the doctor told her he was “as certain as he could be” that it was caused by the e-cigarettes Mr Miller had been using to try and quit smoking.

“I want people to know that despite what Public Health England may say about them being 95% safer than cigarettes, these things can kill. People are puffing away on them thinking they’re totally safe and they aren’t. Our family was left devastated.”

“For all this time I’ve been telling everyone I can that it just isn’t safe and it’s only now nine years later that people are finally starting to question it. Terry was only 57 and had so much of his life ahead of him. Our daughters and grandchildren were distraught and it pains me so much to think of all the big moments in their lives that Terry has missed.”

It follows warnings across the US, with more than 500 cases of lung damage linked to vaping reported and seven deaths reported in the last few weeks, according to the Centers for Disease Control and Prevention.