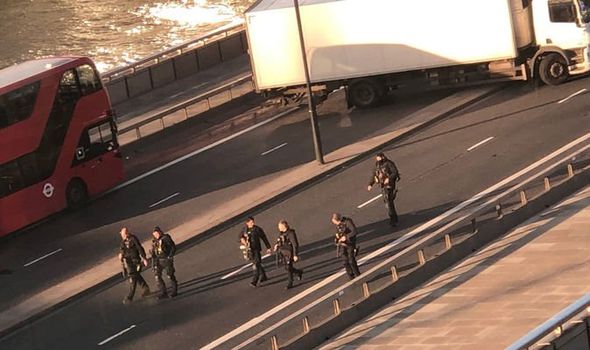 A BBC journalist who was on the bridge at the time said they heard “gun shots” as armed police rushed in and closed off the area.

Witnesses reported a group of civilians pinning a man to the ground before armed police shot and killed the man on the floor.

It is unclear how many members of public were injured or killed but emergency services reported several injuries from a knife.

It has not been announced whether the incident is terror or gang related at this stage.

Witness, Jackie Benfield, 32, a nurse, described how she asked to be let off a bus on London Bridge after she heard “five or six” gunshots.

Ms Benfield, who was on her way home from work, said she exited the bus and “ran like hell” to escape the shots.

Connor Allen, who was in his van on the bridge when it was evacuated said: “Everyone just started running, you heard these pops and that was it. We just got out the van and started running.”