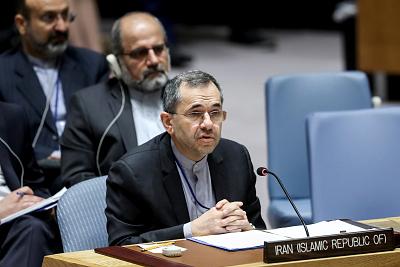 The US assassination of the Iranian military general Qassem Soleimani in Iraq yesterday has lead to rocket attacks on the US embassy in Iraq and US military bases across the entire country.

Iran’s ambassador to the United Nations has declared Trump’s assassination of Iranian military general Qassem Soleimani in Iraq “an act of terror”. The declaration comes as law makers in the US, Iraq and Iran say the assassination is illegal and possibly a war crime.

Hundreds of thousands of protesters took to the streets across Iran and Iraq today in protest against what is being seen as a terror attack by the US. Supporters carried photos of Qassem Soleimani through the streets on the day his coffin was transported in preparation for burial.

Trump is now threatening to attack at least 52 targets if Iran retaliates by striking American nationals or US assets as officials in Tehran have called President Donald Trump as a “terrorist in a suit”.

Hundreds of thousands of mourners pay tribute to Major General Qassem Soleimani during a grand funeral procession across the Iran.

Iranian officials have criticised Trump’s threats to target sites important to Islam and the country’s culture.

Under international law, specifically targeting religious and cultural sites is a War Crime and may be considered Ethnic Cleansing or Terrorism depending on the specific circumstances.

Iraq’s parliament has voted to back a resolution calling on the government to expel all US troops, including US diplomats and personnel – and ensure they cannot not use the country’s land, air, and waters for any reason, commercial, military, civilian or otherwise.

The UK Home Office has advised all UK citizens not to travel to Iraq or Iran.

Iraq’s Prime minister Adel Abdul-Mahdi had earlier urged MPs to end the presence of foreign troops as soon as possible.

This morning saw a rocket attack at the US embassy in Baghdad – hours after mourners chanted “death to America” over the killing of the top Iranian general. Another rocket attack on an air base housing US forces came moments later.

The US claim the rocket attacks all missed and no one was injured. These claims have not been verified by a third party.

The US has been an ally of the US-installed Iraqi government since the illegal 2003 US-UK invasion and assassination of former Iraqi President, Saddam Hussein, but Iraq after years of leaks about UK and US war crimes and systematic abuse has gradually become more closely allied with Iran, Turkey and Russia.

Leaders from the East-Mediterranean Hezbollah groups have warned US military in the Middle East “including US bases, warships and soldiers” are “fair targets following Maj Gen Soleimani’s assassination.” According to reports from Sky News.

In a televised address, Hassan Nasrallah said evicting US military forces from the region is now a priority, but he told his supporters he is “very clear” that American people and citizens should not be harmed.

“The suicide attackers who forced the Americans to leave from our region in the past are still here and their numbers have increased,” Nasrallah added.

Regional leaders from across the Middle-East have unanimously agreed that it is time to use peaceful and diplomatic means to ensure that US troops now leave the Middle-East. Whilst ensuring that civilians and tourists remain safe, unharmed and not harassed.

The UK who along with the US started the wars in the Middle-East with the illegal 2003 invasion of Iraq, have rather unsurprisingly shown solidarity and support of the US. More so now that the UK is leaving the protection of the EU.

The UK Foreign Minister accused Tehran of “nefarious behaviour” and said the US has the “right of self-defence”.

The Foreign Office has issued strengthened travel advice to Brists across the Middle East – including Saudi Arabia and Turkey – while the Navy will accompany UK-flagged commercial ships through the key oil route of the Strait of Hormuz. It is not yet known if the UK navy will require permission from Oman, UAE or Iran to do so legally. Last year US and UK ships were sunk by Iran after the UK captured an Iranian oil tanker off the coast of Spain.

Iran has stated that the world can not afford another Gulf War and world leaders have urged both Iran and the US to deescalate tensions and not to engage in retaliations.

The use of Iraq and Syria as a battle field for a proxy war between the world powers over the 21st century has been devastating for civilians and caused endless humanitarian crisis. Further fuelling such wars is only likely to result in more suffering for millions of innocent civilians.