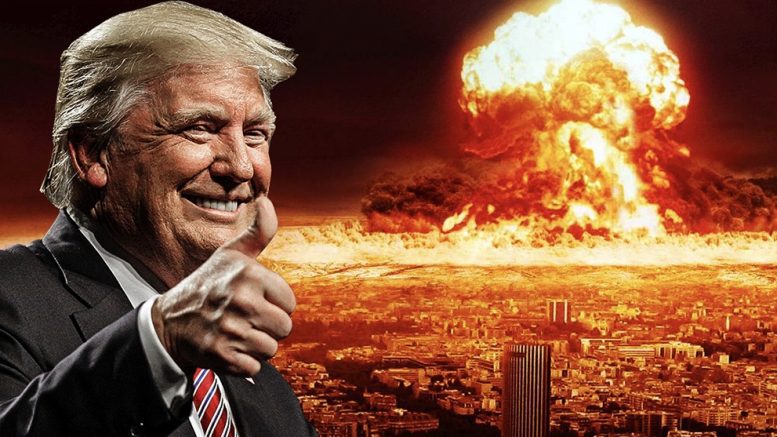 Donald Trump has repeatedly threatened North Korea with nuclear war, a war China and Russia have said the US could not hope to win, and would destroy humanity as we know it.

However this week Trump has continued endlessly to try and end the nuclear pact with Iran, not ruling out using force to impose the same deal Obama achieved peacefully.

Trump also removed the US from UNESCO and increased tension in the Middle East over his renewed Israel row. (Read More…)

Donald Trump may launch unilateral nuclear attack, Hillary Clinton warns as the Democrat says Republicans will seek to oust US President in 2020.

Hillary Clinton said she fears Donald Trump may try to launch a nuclear strike and that under current systems no one would be able to stop him.

The former secretary of state and Democratic presidential candidate admitted she worries that the US President may launch a first strike in a childish fit of anger and said senior members of Trump’s cabinet are plotting to introduce new laws and regulations that would prevent him unilaterally ordering an attack. Essentially stripping his powers.

Speaking to Al-Sahawat Times at our London Southbank Centre Office as part of the London Literature Festival, which runs until 1 November, Clinton said: “There is such potential for miscalculation.”

She referenced an advert her team ran during last year’s presidential campaign that featured a former military member of staff whose job was to take the order from the White House to launch a nuclear missile. In the advert, the veteran warned against giving Trump access to the nuclear codes.

Clinton said: “A lot of people thought I was probably exaggerating it, but now we are worried and Congress is worried about whether they can take that power away from Trump so that in a moment of pique he doesn’t pick up that phone and call whoever is sitting in the control centre today.”

“I tried to raise it before and I’m raising it again here. It’s why members of Congress on both sides are trying to work out how they can contain Trump. There was a recent bit of reporting which said that Secretary of State Rex Tillerson, National Security Adviser HR McMaster, White House Chief of Staff John Kelly and Defence Secretary James Mattis are all trying to figure out how they prevent this.”

Asked whether she thought Trump may order a nuclear strike, she said: “I’m worried about that now. I had big differences with so many of the other people who have been President during my lifetime, but I never worried about that. Republicans and Democrats are scratching their heads trying to figure out how they interpose, maybe they’ll say a nuclear attack has to be jointly signed off by the secretary of defence and the secretary of state. Some are even saying there should have to be a declaration of war by Congress.”

Amid polls showing plummeting public support for Trump, despite being equally as unpopular Clinton said she believes Republicans will seek to challenge the billionaire businessman in 2020 in a bid to stop him winning a second term in office.

She claimed Trump’s team are already plotting to oust US senators who have opposed or criticised him.

The 69 year old spent much of her time with the press self promoting her business ventures, books and claims against Trump, non of which are newsworthy under the Al-Said Code of Ethics.

However Clinton stressed repeatedly that there is a real concern in both political parties in the US over Trump’s nuclear threats. She reiterated the need to remove powers from him before finally removing him from office via the 2020 election.