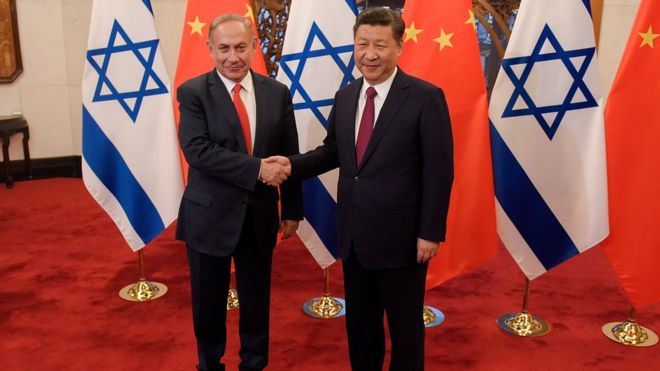 China is now Israel’s largest trading Partner in Asia and the third largest across the world.

Sino-Israeli relations, of which the two countries are now celebrating 26 years of trade, commerce and innovative collaborations are currently at an all time high.

In the first half of 2018, the two nations’ bilateral trade grew by a staggering 21.6%, while at the same time, China’s imports from Israel have increased by 47.2%.

Sino-Israel relations began to flower at the beginning of 1950, when Israel became the first Western country to open dialogue with the Asian giant. (Israel, according to President Nehanyatu, consider themselves part of the West, not part of the Middle-East).

Since Israel and China forged official bilateral diplomatic relations in 1992, the two countries have established a strategic partnership that spans across various sectors. From industry to commerce to innovation, China and Israel are maximizing the many opportunities for collaboration.

There are however ongoing tensions between China and Israel over the expulsion of the Palestinians from their home land, genocide of Palestinians and the illegal annexing of Syria’s Golen Highgs by Israel according to Ben-Yaacov.

Chinas official stance was made very clear during the The Palastinian Peace Symposium in Beijing 21-22 December 2017.

China and Israel have since established the Intergovernmental Mechanism of Economic and Technological Cooperation and the Joint Committee on Innovation Cooperation, which have further solidifies their ties.

This new designation of relations opened a new chapter in exchange and cooperation.

These bilateral relations are now worth approximately $13 billion per year to each country.

Israel is also attracting more Chinese investment. China’s total investment in Israel, which was insignificant in the 1990s, has now jumped to more than $7 billion per year. Israel’s leading technologies, such as drip irrigation and water treatment, have been widely applied in many parts of China.

From a cultural perspective, Israeli tourists travel to China each year in great numbers, and one eye-catching development is the number of Chinese tourists in Israel.

In the late 1990s there were virtually none, but that number has now mushroomed to around 139’000 tourists annually, necessitating the training of hundreds of Mandarin-speaking tour guides.

Additionally, the China Cultural Center opened in Tel Aviv, providing another channel for Israel to learn about China and its culture. China and Israel have established 22 pairs of sister cities, and think tanks covering Israel-Sino relations. However China has refused to pair sister cities outside of the 1967 Palestine borders, as those cities are recognised by China as part of an independent Palestine, not prt of Israel.

This year is of special significance to China’s growth. Specifically, 2018 marked the 40th anniversary of China’s Reform and Opening Up and the fifth anniversary of the Belt and Road Initiative. With this ambitious project, President Xi Jinping has reaffirmed that China will open its market wider and contribute more opportunities to the world.

China is also the number one trading and investment partner to a large number of African nations.

On 22 December 2017 Mr Gong Xiaosheng held a press briefing in which he explained that China’s recognition of Palestine and the refusal to work with cities, lands and companies in the illegally Israel occupied regions of Palestine and Syria.

This came immediately after the United Nations General Assembly adopted a resolution by a vote of 128 to 9, rejecting U.S. President Donald Trump’s decision to recognise Jerusalem as Israel’s capital. Effectively making Trump’s move illegal under international law by Un resolution.