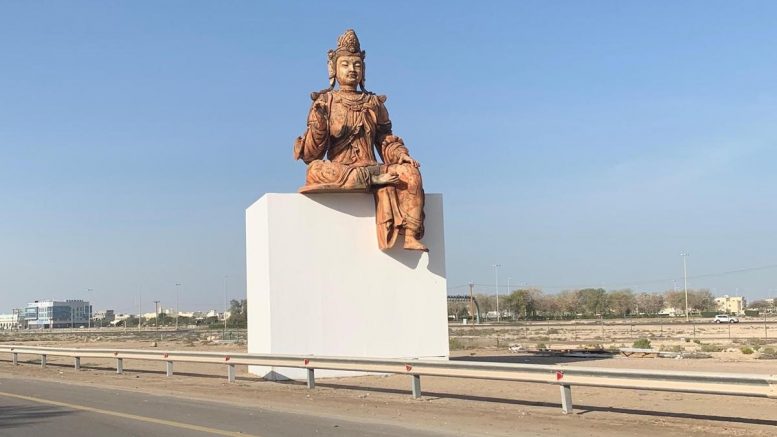 The Giant Buddhist sculpture is part of the second Highway Gallery by Louvre Abu Dhabi,
which is currently being installed

The statue is a reproduction of the wooden Guanyin, Bodhisattva of
Compassion from China, as part of the Louvre Abu Dhabi Highway Gallery.

Did you notice a Buddhist sculpture on the E11 Sheikh Zayed Road this
morning?

It’s sitting proudly, with perfect posture and one leg folded, next to the
arterial road near Al Rahba in Abu Dhabi as part of the second Highway
Gallery by Louvre Abu Dhabi.

The gallery, which officially launches Today, Sunday 7 April 2019, is made up of ten
artwork replicas: reproduced as giant 3D sculptures or as 10-metre-high
billboards. 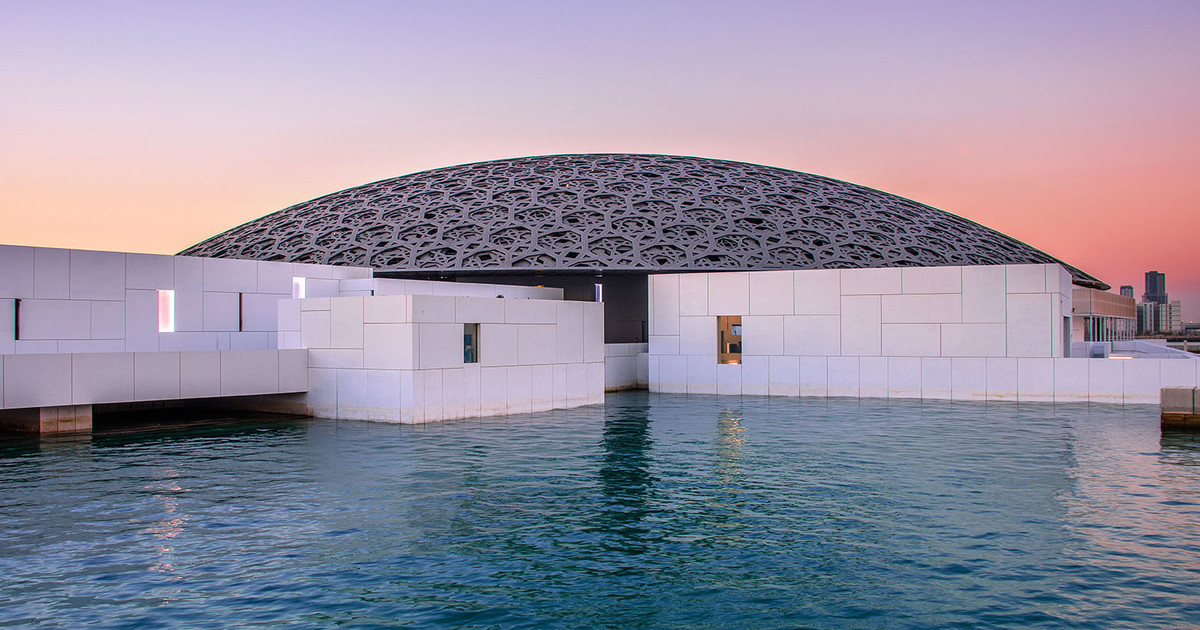 The Buddhist work is a reproduction of the wooden Guanyin, Bodhisattva of
Compassion from China, which is dated from between 1050 and 1150. It is
the work that greets visitors when they arrive at the Asian Trade Routes
gallery in the Saadiyat Island museum.

Another 3D piece that will stand tall along the highway this month is a
reproduction of a 4,000-year-old Bactarian Princess statuette from Central
Asia (dated around 2,300 BCE):

Overall, the collection of 10 works will reflect many moments in history, as
well as different peoples and cultures. There will be an image of a vase
found on the UAE island of Marawah circa 5,500 BCE; a look at a 15th
century Islamic helmet; a 17th century Hindu manuscript and, already
installed, is a giant-sized replica of Japanese suit of armour from the early
18th century.

Representing the 19th century will be James Whistler’s seminal 1871
portrait of his mother sitting, staring out at the distance. There’s also Van
Gogh’s 1888 work The Dance Hall in Arles, which is known for its
movement, frenetic energy and use of curves. Moving to the 20th century,
you’ll pass by a surrealist work by Joan Miro.

You can also learn more about the pieces on your drive: from next Sunday
you will be able to tune into Radio 1 FM (100.5FM), Classic FM (91.6 FM)
and Emarat FM (95.8 FM), and as you drive towards the display, you will
automatically hear a 30-second story about each work. How? There’s a
trigger a few metres before each work that sets off the audio (ah,
technology). The narrations will be read by well-known UAE personalities,
including entrepreneur Anas Bukhash, figure skater Zahra Lari and chef
Khaled Alsaadi.

Speaking of Highway Gallery 2.0, Mohamed Khalifa Al Mubarak, Chairman
of the Department of Culture and Tourism, pointed out that the works
chosen this year highlight Louvre Abu Dhabi’s culturally open approach in
this, the Year of Tolerance:

“The Highway Gallery is a prime example of our efforts to make art and
culture an integral part of everyday life in the UAE, further enriching the
lives of those who reside, work, and visit here. As the UAE celebrates the
Year of Tolerance in 2019, we see the Highway Gallery as an extension of
Louvre Abu Dhabi’s physical galleries, bringing its universal collection of
works from different geographies and cultures, and its celebration of
humanity, to the widest possible audience.”

Last year’s Highway Gallery included major Louvre Abu Dhabi works and
loans such as Piet Mondrian’s Composition with Blue, Red, Yellow and
Black (1922); the first work by Leonardo da Vinci shown in the Emirates, La
Belle Ferronniere (1495¬-1499); and one of the oldest monumental statues
still existing, a haunting sculpture of a two-headed figure from the Neolithic
era (about 6500 BCE) that was found in Ain Ghazal, Jordan.

“This road is so important, linking the two main cities,” said Manuel Rabate,
the director of Louvre Abu Dhabi, at the launch of last year’s Highway
Gallery. “We thought, what we can add with an interesting, creative
process? Let’s bring the content to the people, if they can learn something,
we can change a little bit the monotony of the drive.”