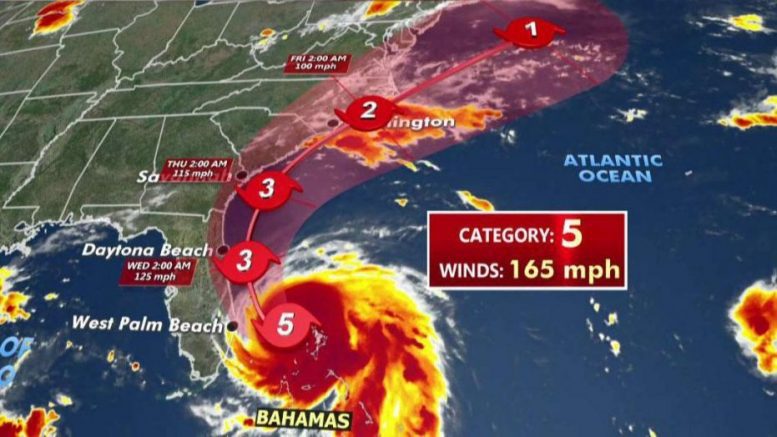 President Donald Trump this weekend told reporters he’s unsure if he’s “ever even heard of” a Category 5 hurricane shortly before Hurricane Dorian made landfall in the Bahamas.

“We don’t even know what’s coming at us,” Trump said in reference to Hurricane Dorian during a press conference at the FEMA headquarters in Washington D.C. on Sunday. “All we know is it’s possibly the biggest. I have — I am not sure I’m not sure that I’ve ever even heard of the Category five, I knew it existed.”

“And I’ve seen some Category fours, you don’t even see them that much, but a Category five is something that I don’t know that I’ve ever even heard the term other than I know it’s there,” the president added. “That’s the ultimate, and that’s what we have unfortunately.”

Trump’s remarks came shortly before Hurricane Dorian touched down on the Abaco Islands in the Bahamas earlier today, according to CNN. Dorian intensified to a Category five storm on Sunday, according to the National Hurricane Center’s mid-morning update, with wind speeds hitting as high as 185 miles per hour.

Hurricane Dorian is the fourth Category 5 storm to have threatened the US since Trump took office in January 2017, despite the president claiming he has never “even heard” the term.

The first to hit was Hurricane Irma, which affected more than nine states across the country, in September 2017. Irma was determined a Category 5 roughly eight months into Trump’s presidency.

Later that month, Hurricane Maria struck the unincorporated US territory of Puerto Rico, leaving behind a vast amount of devastation that the Caribbean island is still struggling to recover from. Trump was criticised for his apparent lack of compassion shown towards the people of Puerto Rico.

In October, two months later, Hurricane Michael became the third Category five storm to hit the US under Trump’s presidency as it touched down in the mainland state of Floria.

The president has previously said on numerous occasions that he’s “never” seen or heard of a Category five hurricane. In September 2017, during a period between Hurricane Irma and Maria, the president claimed he “never even knew” a hurricane of such intensity existed. One month later, Trump said “nobody has ever heard of a [Category] 5 hitting land.” He repeated similar claims earlier this year.

Federal Emergency Management Agency (FEMA) Deputy Administrator Dr. Daniel Kaniewski told Newsweek this weekend that residents who are in Dorian’s potential path, from Eastern Florida to the Carolinas, should be proactively preparing for a potential evacuation.

In August 2019 Trump raised alarm by suggesting the US should drop nuclear bombs on hurricanes to stop them reaching the US because they ‘mostly came from Africa’.