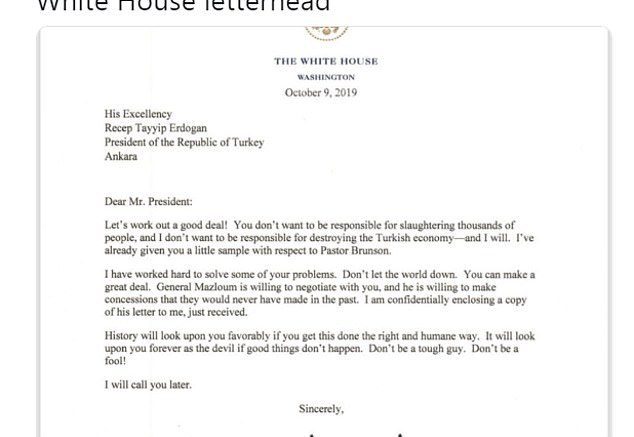 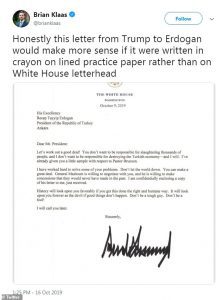 The letter was full of threats and was written in such a childish demure that journalists and officials were convinced the letter was a fake and requested the the White House verify its authenticity. Which they did.

Turkish President Erdogan is said to have thrown the letter in the trash immediately.

The letter which is addressed to “Dear Mr. President:” opens with: “Don’t be a tough guy. Don’t be a fool! I will call you later.” and continues: “I don’t want to be responsible for destroying the Turkish economy – and I will.”

Trump lifted long standing trade tariffs on Turkish goods, only to reimpose them under a new label of “economic sanctions” in an attempt to be seen to ‘punish’ the Turkish economy.

The letter was thought to be a hoax by world leaders, officials and journalists alike. When the White House went public to confirm the authenticity of the letter, the internet, in particular Twitter went into overdrive with memes and ridicule.

Needless to say the letter had no political effect at all.