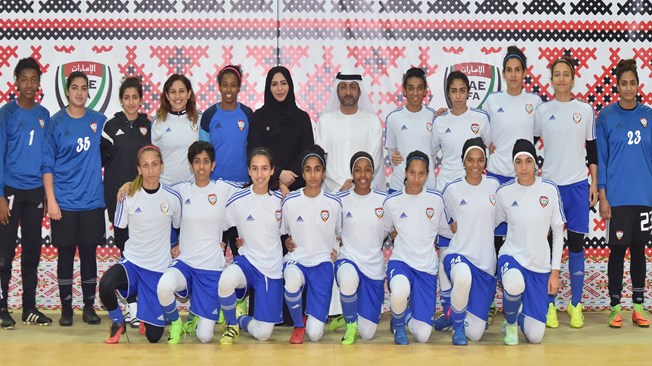 Fans of women’s football in the United Arab Emirates are excitedly awaiting the beginning of their first-ever qualifying campaign for the AFC Women’s Asian Cup, to be held next year in Jordan, where five berths for the FIFA Women’s World Cup France 2019™ will be up for grabs. This dream is the culmination of an organised effort in the UAE to propel women’s football to the highest level within the shortest possible time frame.

Hitting the target
It was several years ago now that young Emirati women were bitten by the football bug, thanks in part to Noura Al-Mazrouei, who was already an avid fan of European leagues when one of her professors at Abu Dhabi University became aware of her love for the beautiful game.

He subsequently recommended that she join a new women’s team in Abu Dhabi, where she began her playing career as a forward, although she would eventually convert to goalkeeper. She is now the captain of the UAE women’s national team, which benefits not only from her sporting prowess, but from her leadership qualities as well.

Al-Mazrouei’s first steps in the game were not straightforward, but she has battled hard to promote women’s football in the Middle East and is now on the verge of achieving a long-term goal.

“I remember when we were just a small group of girls with dreams of kicking a ball around, but we’ve worked hard and learned a lot.”

“We’ve overcome teams that have been around a lot longer, and we won two West Asian Championships in a row. Now, we’re about to turn another dream into reality by taking part in these Asian Cup qualifiers. We’re going to Tajikistan with the aim of qualifying. We know it won’t be easy, but we’re determined.”

Al-Mazrouei continued: “We have an exceptional squad. Over the past few years, we’ve really moved on to a different level, thanks to some great work by those responsible for women’s football in the Emirates. All of the players are enthusiastic about the challenge that lies ahead, and want to come back home with a slot at the Asian Cup in the bag.”

The UAE’s team is made up of a blend of experienced players, like Al-Mazrouei, and young talents, like 20-year-old Nouf Al-Adwan, who has represented her country at various youth levels and has turned out for several clubs in Abu Dhabi. The gifted No10 has quickly established herself in the Emirati midfield.

“Taking part in Asian Cup qualifying will represent a turning point in all of our careers,” she said. “We want to show what we’re capable of and prove that football has really progressed here. From a personal point of view, I want to be at my best to help the team and my country to qualify. That’s a dream that we all hold dear.”

Unlimited ambitions
Although this will be UAE’s first appearance in the Asian Cup qualifying tournament, Emirati women’s football officials have continued to set their sights high. “We started from scratch,” said Amal Abu Shallakh, member of the UAE Women’s Football Association board and the AFC Committee for Women’s Football.

“Thanks to the interest and support shown by Sheikh Hazza Bin Zayed Al Nahyan, who is the Vice-chairman of the Abu Dhabi Executive Council and Honorary Chairman of the UAE Football Association, we established the Abu Dhabi Sport Club in 2004, so as to give young girls the chance to take part in all kinds of sports, including football, in line with the country’s habits and customs.

“We took that first step and the FA then approved the sport. The Women’s Football Committee was set up in 2009, and we created a women’s team on a sound basis. We hosted the West Asian Championship twice and came out on top both times, despite the presence of strong teams like Jordan and Iran.

“Now we’re hopeful that the team can qualify for the 2018 Women’s Asian Cup, which would give our development efforts a real shot in the arm. We launched our school leagues – with 16 U-13 and U-15 teams – in 2012. We then built on that success by launching national teams at U-14 and U-16 level. Last but not least, we strengthened our presence right across the UAE by opening 22 training centres.”

Now all that remains is for UAE to do their talking on the pitch. Over the next two weeks, they will face Jordan (who have already qualified as hosts), Philippines, Bahrain, Iraq and Tajikistan in a tough-looking Group A, with the section winners advancing to the Women’s Asian Cup.