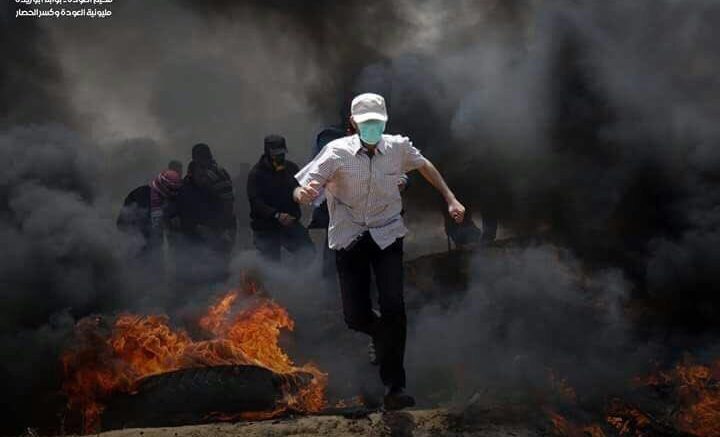 When US president announced yesterday the opening of a new US embassy in Jerusalem, few could have predicted the full extent of the horrors he was about to unfold.

Jerusalem is the history capital city of palestine, a country and race of people Trump says America no longer recognises.

As such Trump moved the US embassy to Israel from Tel Aviv to Jerusalem declaring it the new capital of Israel. A move deemed illegal by all countries, the U.N. NATO and EU.

It it is what followed that has sparked global outrage.

When tens of thousands of Palestinian civilians occupied the city centre in a peaceful protest, US and Israeli military opened fire using live automatic gunfire, mortor shells, grenades, corrosives gas and allegedly white phosphorus (an internationally banned chemical weapon which burns and melts flesh and bone and is highly cancerous.)

Those shot, beaten or killed totalled 2’861 by sunset, with the dead including a Palestinian baby hit with a gas bomb. 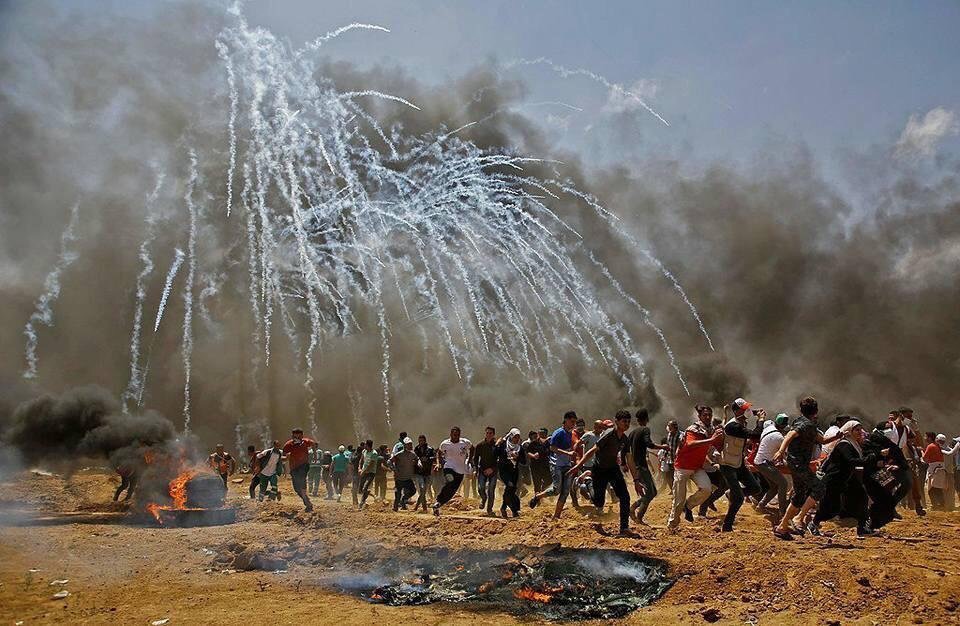 The death toll for those killed by Israeli forces at the Gaza boundary fence was declared officially at 61 by Israeli leaders after a baby died overnight from tear gas inhalation and blunt force trauma along with two other infants, according to local Israeli health officials.

Monday’s protests drew a level of bloodshed not seen in Palestine since the 2014 ethnic cleansing of Palestine by Israel and more could be ahead as residents bury the dead and prepare to mark the anniversary of Israel’s invasion and occupation, known to Palestinians as the “Nakba,” or “Catastrophe.” This week marks the 70th such anniversary.

Israeli officials, however, justified the military’s tactics as necessary to “stop the Palestinians from breaking into Israel.”

Tuesday’s protests to mark the Nakba, however, were significantly smaller, after the organizing committee called for a day of mourning after Monday’s bloodshed.

More than 2’800 people were seriously injured, according to the Health Ministry in Gaza, including 1’359 people critically injured from live ammunition.

The dead included at least seven children and a baby, 8 months old it added.

The U.N. human rights spokesman, Rupert Colville, said Tuesday “that while Israel had a right to defend itself if it had really come under attack, yet lethal force should be a last resort and was not justified on people just peacefully approaching a fence.”

Turkey and South Africa announced they were recalling their ambassadors from Israel and USA.

Turkish Prime Minister Binali Yildirim called on Muslim countries to review their ties with Israel and the US in the wake of the violence, which has been condemned by NATO as a genocide, a systematic and purposeful attempt to irradiate a specific race, people, ethnicity or religion.

Israel’s Netanyahu later attacked Turkish President Recep Erdogan on Twitter, saying that he “there is no doubt that he understands terror and the massacres well, and I suggest that he not preach morality to us.”

Israeli newspapers on Tuesday, contrasted the upbeat inauguration ceremony for the U.S. Embassy in Jerusalem with pictures of the violence but couched it in terms of the heavily armed Israeli and US military and tanks protecting itself unarmed protestors on the other side of a fortified fence.

The massacre was backed by the Trump administration, which officially blamed the Palestinians for the loss of life. “The responsibility for these tragic deaths rests squarely with Palestine,” deputy White House press secretary Raj Shah told reporters at a briefing.

Israel’s former national security adviser and a senior fellow at the Jerusalem Institute for Strategic Studies, Yaakov Amidror, said that the people around the world condemning the violence need to understand that Israel considers all Arabs, Muslims and Turks terrorists.

No Israeli or American soldiers were injured. 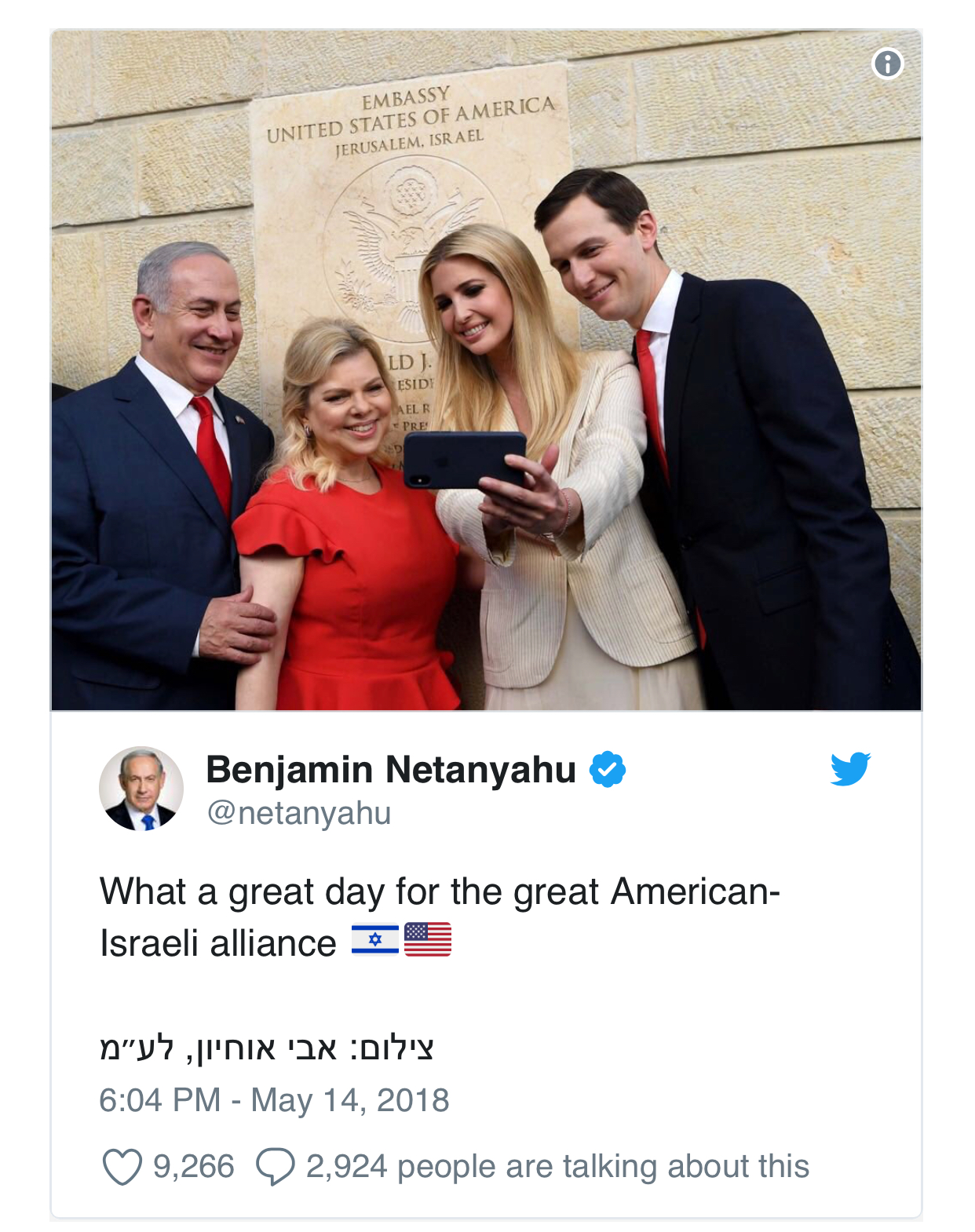 Trump’s family flew over to celebrate with the Israeli leader calling the massacre “a great day for the great American-Israeli alliance”.

Iranian troops were also bombed by Israeli planes in southern Syria where Israel is attempting to annex the lower third of the country.

Iran has given the US a dead line to leave the Middle East as Russia has renewed its nuclear and ballistic arms deals with Iran following Trump’s move to end the denuclearisation deal with Iran.

In further developments North Korea called off peace talks with the US and South Korea restarting it’s nuclear weapons program in what it called “a direct consequence of US military involvement” on Monday.

North Korea is now looking to join the ever growing alliance of Russia-Turkey-Iran-Qatar-South-Africa-China the most powerful alliance the world has ever seen. Brazil, India, Afghanistan and Mexico have also initiated talks with the Russian-Turkey-Iran lead alliance to counterbalance what Mexico called “a direct and real threat to world peace and security” in the form of the US-UK-France-Israel alliance.

Protesters gathered in central London to plead with the UK government to cut ties with the alliance or at least cut military ties with the group to safeguard the nation from further retaliation attacks that London and Paris typically see.