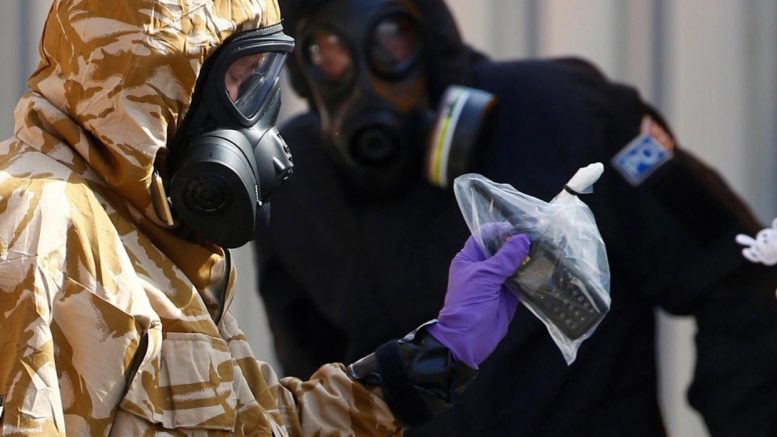 Is Novichok a British weapon?

The UK saw 2018 bring three Novichok outbreaks so far. The poisoning of former spy and double agent Skripal and his daughter, two apparently unconnected individuals (Mr Rowley and Miss Sturgess were a couple) 8 miles away and another outbreak outside the restaurant where the Skripals fell ill.

The UK was fast to blame Russia and impose sanctions whith many EU nations expelling Russian diplomats. The UK named the chemical weapon as Agent Novichok and said it was clearly a Russian attack.

Russia denied ever having seen the chemical compound before, instead suggesting it was of British origin.

British police have now revealed that the nerve agent that poisoned the two families came from small chemical vial in the latest victim’s house.

The Novichok nerve agent that poisoned the couple in Amesbury was confirmed to have come from a bottle found in one of the victim’s homes, police say.
Scotland Yard said a bottle found in Charlie Rowley’s house had been tested by scientists at the Defence, Science and Technology Laboratory (DSTL), at Porton Down.

It was found to be the ground zero source of the deadly substance and possibly  the source of all three outbreaks.

Rowley, 45, remains in hospital after he was poisoned on 3 June 2018. His partner, Dawn Sturgess, 44, died last weekend from the substance.

British papers reported that the vial was found in Mr Rowley’s possessions.

In a statement, police said: “Following those tests, scientists have now confirmed to us that the substance contained within the bottle is Novichok.

“Further scientific tests will be carried out to try and establish whether it is from the same batch that contaminated Sergei and Yulia Skripal in March – this remains a main line of enquiry for police.

“Enquiries are under way to establish where the bottle came from and how it came to be in Charlie’s house. Mr Rowley remains in a “serious but stable” condition, while staff continue to provide him with round-the-clock care.”

An inquest into her death is set to open and adjourn in Salisbury on Thursday, 19 July 2018.

Assistant Commissioner Neil Basu, Head of UK Counter Terrorism Policing, said: “This is clearly a significant and positive development. However, we cannot guarantee that there isn’t any more of the substance left and cordons will remain in place for some considerable time. This is to allow thorough searches to continue as a precautionary measure for public safety and to assist the investigation team. I also appreciate there is a lot of interest in this; however, we are not in a position to disclose any further details regarding the bottle at this stage. The safety of the public and our officers remains paramount and we are continuing to work closely with Wiltshire Police, scientists, health experts from Public Health England and other partners.”

Around 100 detectives from the Counter Terrorism Policing Network continue to work on this investigation, alongside colleagues from Wiltshire Police.

Officers say the advice remains for residents who live nearby, that “if you didn’t drop it, then don’t pick it up.”

Russia has said that all the evidence has always pointed to this being a British domestic issue of chemical containment outside of international interference.

If it is confirmed that the Novichok agent is indeed British then Russia may seek legal and financial action against the UK and EU, with the EU seeks to recover their losses from the UK for false intelligence was was the case over the Iraq invasion in 2003. This is yet another damming blow to the UK intelligence credibility as many nations will now move to discount any UK born information on global events.