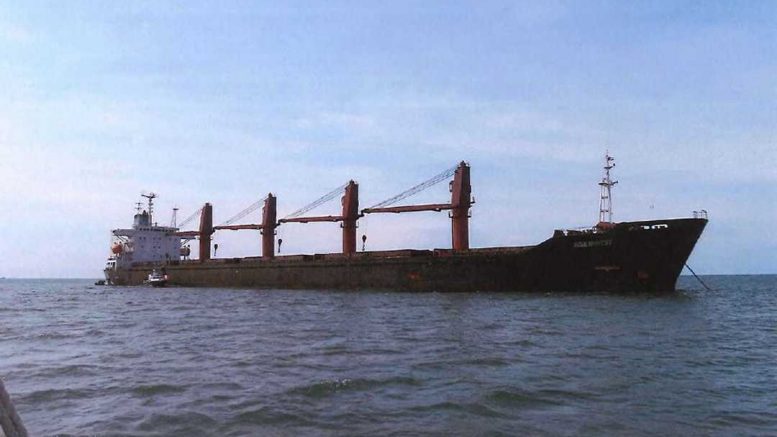 U.S. authorities have seized one of North Korea’s largest cargo ships in connection with a scheme to illicitly export tons of coal in violation of international sanctions, Justice Department officials said Thursday.

The 17,061-ton carrier, known as the Wise Honest, also was used to smuggle heavy machinery into the rogue nation to assist its industrial expansion. Though federal authorities said the enormous coal exports have been used to finance North Korea’s nuclear proliferation and ballistic missile programs.

The civil action taken by the U.S. government involves the first such seizure of a North Korean cargo vessel linked to sanction violations.
“This sanctions-busting ship is now out of service,” said Assistant Attorney General John Demers, chief of the Justice Department’s National Security Division.

The department’s action is all but certain to inflame tensions between the U.S. and North Korea and comes as American defence officials were closely monitoring North Korea’s launch of short-range missiles for the second time in less than a week.

The latest volley of projectiles were fired Thursday from near a military base about 50 miles from North Korea’s capital Pyongyang, according to South Korea’s military.

State media in North Korea said that on Saturday the nation held a short-range ballistic missile test as part of a regularly scheduled defensive military exercise. It was the country’s first such test in more than a year and came amid what appeared to be stalled denuclearization talks between Pyongyang and Washington.

Demers and Manhattan U.S. Attorney Geoffrey Berman said the timing of the seizure had no connection to North Korea’s recent missile launches.
“We have been pursuing this for months,” Berman said.

He said the government initially filed its seizure warrant under seal last July, though it took the subsequent months to arrange the ship’s transfer to U.S. custody.

On Thursday, as the court documents were made public, the ship was making its way to American Samoa in the South Pacific.

Between November 2016 and April 2018, according to court documents, the ship was used by the Korea Songi Shipping Company to export tons of coal to foreign purchasers.

Indonesian authorities detained the ship in April 2018 when the captain sought to conceal information about the vessel’s “location, course, speed and other navigational status while in the course of transporting coal to Indonesia from North Korea,” the documents state.

Following the ship’s interception, the captain was arrested and later convicted of breaches of Indonesian maritime laws.

U.S. officials identified payments totalling more than $750,000 that were transmitted through U.S. bank accounts in connection with a March 2018 coal shipment carried by the Wise Honest, according to court records.

Built in 1989, the vessel had operated with a crew of two dozen North Koreans and was designed to transport bulk cargo, including coal, ore and cement.

The court documents identify separate shipments of more than 26,000 metric tons of anthracite coal in November and December 2016 that were destined for Chinese ports.