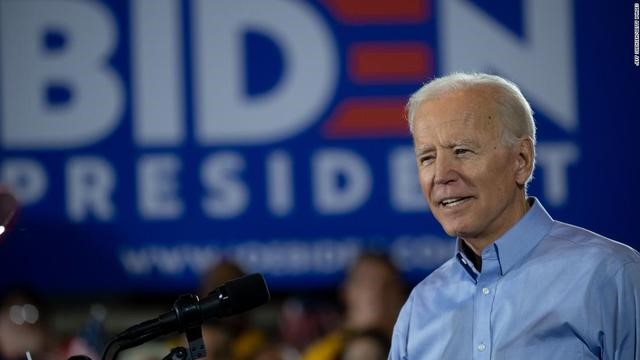 Joe Biden’s campaign has offered its first response after President Donald Trump’s personal attorney Rudy Giuliani said he would make a now-cancelled trip to Ukraine to urge the country to investigate the Democratic presidential candidate.

“It’s great to see all these strong progressive voices stand up to this attempt at a blatantly political smear which in and of itself reflects the urgent need for change and to restore the soul of the country,” a Biden campaign official told press.

Friday, Sen. Elizabeth Warren and former Rep. Beto O’Rourke were among the 2020 Democratic contenders to express concern about Giuliani’s efforts.

“I just think it is highly unethical for the President’s personal lawyer to go meet with officials from foreign government to see if they can influence somehow the upcoming presidential election,” Warren said in Kermit, West Virginia. “We’ve had enough of that and Rudy Giuliani should just back off.”

In New Hampshire, O’Rourke said Giuliani’s proposed trip to Ukraine was “so very troubling, very disappointing, and yet not a total surprise, given this President’s behaviour and the pattern that he’d already set.”

Democratic lawmakers on Capitol Hill also chimed in with criticism of the proposed trip.

“It’s stunning that the Trump administration is going down the same tragic path they did in 2016. Here you have the President’s lawyer seeking help from a foreign government again to influence a presidential election. It’s just appalling,” House Intelligence Committee Chairman Adam Schiff said Friday.

“And his defence that he’s not seeking a foreign government’s help in the election, just an investigation — yes, it’s an investigation designed to affect one of the candidates they fear the most. I think it’s reprehensible.”

Sen. Chris Murphy, who called for a Senate query on Giuliani’s proposed trip to Ukraine before it was cancelled, tweeted, “I know we’ve become numb to the corruption of this Administration, but this story should be the total focus of the political class today. The President is openly asking a foreign government to investigate his political rival. This is next level.”

Giuliani revealed his intention to travel to Ukraine on behalf of his client in a Thursday interview with The New York Times, but by Friday night, that plan was cancelled.

Giuliani planned to meet with the country’s president-elect to encourage him to pursue two matters of interest to Trump: restarting an investigation into a Ukrainian company linked to Biden’s son, and looking into whether Ukrainians worked with Democrats to prompt the FBI investigation into Trump’s former campaign chairman, Paul Manafort.

Earlier Friday, Giuliani had defended going to Ukraine to press for an investigation into Biden’s call to remove a top Ukrainian official in 2016, when Biden was vice president. Biden called for the removal of the top Ukrainian prosecutor, who at one point had been investigating a Ukrainian natural gas company connected to Biden’s son, Hunter.

Within a year of the prosecutor’s removal, Ukraine’s new prosecutor general dismissed the case against the company, Burisma Holdings, a natural gas company controlled by one of Ukraine’s top oligarchs. Other Western governments also called for his removal, and no evidence has indicated that the move by Biden was inappropriate.

The Biden campaign has previously referred the news media to a statement a spokeswoman provided to The New York Times, which said Biden acted on Ukraine “without any regard for how it would or would not impact” Hunter’s business interests.

As Democrats criticized the trip as politically motivated, Giuliani insisted earlier Friday that the trip to Ukraine to seek to influence potential investigations would not have been meddling because the 2020 election is still 18 months away.
“I don’t want any favours. I just want this investigated,” Giuliani said.

Giuliani had previously told the news media that a “well-regarded investigator” he’s known for years put him in touch last November with current and former Ukrainian officials, who he says he’s interviewed over Skype and in person. In 2017, both the Democratic National Committee and a contractor denied working with Ukrainians.
But in a Friday night interview with Fox News, Giuliani said he won’t go to Ukraine, “in order to remove any political suggestion.”

“I will step back and I’ll just watch it unfold,” he said. That news came hours after President Trump told Politico in an interview that he planned to speak with Giuliani about the trip.