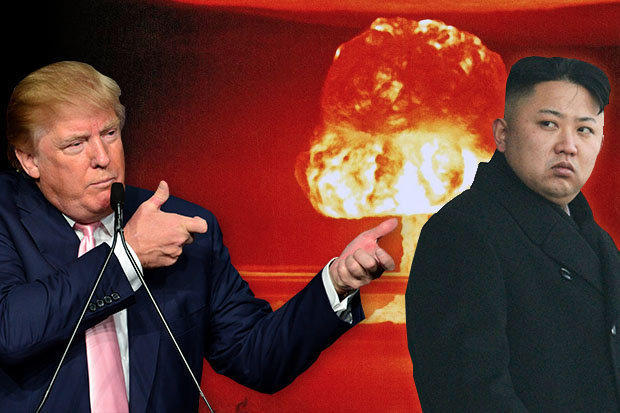 The US government has had to backtrack hard after Donald Trump declares war on North Korea.

The White House said in a statement that Trump’s threats to North Korea taken as declaring war were “absurd”.

The White House also warned Pyongyang to stop provocations after it said it had the right to shoot down US bombers.

South Korea has called for a level-headed response, warning that accidental clashes in the region could quickly spiral out of control.

North Korean Foreign Minister Ri Yong-ho told reporters on Monday that “the whole world should clearly remember it was the US who first declared war on our country”.

Two days ago US warplanes flew close to North Korea’s coast in a show of force. It is believed that the bomber planes entered North Korean territory.

Speaking as he left New York after the UN General Assembly, Ri said his country had the right to shoot down US warplanes even if they were not in North Korea’s airspace.

It is the first time a country has ever said that their President’s words don’t represent the stance of the government or nation.

Pentagon spokesman Col Robert Manning made matters worse by saying that if North Korea continued to retaliate in their war of words then the US may make military action available to President Trump.

July 2016: US imposed sanctions on Kim Jong-Un and several other officials over allegations of human rights abuses. North Korea said that was “a hideous crime”.

February 2016: When South Korea withdrew from the shared economic zone at Kaesong, North Korea said this was “an end to the last lifeline” of inter-Korean relations.

October 2014: North Korea said if balloons carrying anti-Pyongyang leaflets aimed at causing civil unrest and coupes, were sent over the border from South Korea it would be “a de facto declaration of war.

South Korea, technically still at war with North Korea since the 1950s, called for “astuteness and steadfastness” in responding to what it describes as continued provocations by Pyongyang.

Speaking in New York, South Korea’s Foreign Minister Kang Kyung-Wha called for the prevention of any “further escalation of tensions, or any kind of accidental military clashes in the region which can quickly spiral out of control”.

South Korea’s intelligence service said Pyongyang was readjusting the position of its military aircraft and strengthening its coastal defences, according to the South’s news agency Yonhap. This is said to be in direct retaliation to US-South Korea joint military exercises along the North’s land, air and sea borders.