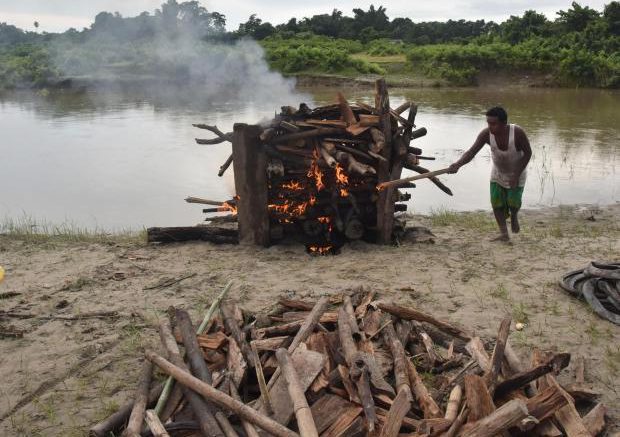 Rachna Sisodia, 24-year-old woman from India who was cremated on a funeral pyre may have been alive when the cremation took place, according to local reports.

Student Sisodia had been declared dead at Sharda hospital in Greater Noida, in northern India’s Uttar Pradesh state. The cause of her death was given as a lung infection.

Sisodia had been declared dead at hospital

Sisodia’s body was released to her husband Devesh Chaudhary, 23, who drove it to a funeral, located two hours away, where the cremation was carried out.

Al-Sahawat Times heard from Indian State officials that police then arrived on the scene and pulled the woman from the fire, believing she was still alive.

The subsequent post-mortem later concluded that Rachna had died from “shock caused by being burnt alive” after post-mortem revealed ash in her respiratory tract.

A hospital spokesperson told Al-Sahawat Times: “This happens when someone is burnt alive. The particles go inside with the breath. If a person is dead, such particles cannot reach the lungs and windpipe. So the doctors concluded that the woman was burnt alive on the pyre.”

However, medics from Sharda hospital stand by their verdict that Ms Sisodia had died in hospital.

Dr Pankaj Mishra, who conducted the post-mortem, was quoted by the Times of India as saying that he could not be sure if the body was Rachna’s due to the extent of burning.

Mr Chaudhary has told international press he believes attempts are being made to frame him for his wife’s murder.

Police gave no comment as to whether or not they are or are contemplating an investigation for murder or medical negligence.