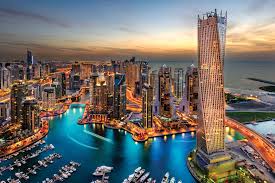 The United Arab Emirates forecasts that savings generated by switching half its power needs to clean energy by mid-century will outstrip the investment costs.

The Gulf state plans to invest $150bn in renewable power to 2050, weaning the country from dependency on subsidised natural gas power in stages, Minister of Energy Suhail Al-Mazrouei said at a conference in Berlin. Clean energy sources will help it save $192bn he said.

The UAE leadership is “bullish” about achieving the goal after realising that the nation can forgo subsidies in the switch to clean power from liquid natural gas (LNG), Al-Mazrouei said. Sticking to the strategy will “save the environment and at the same time save us lots of money,” he said.

As the costs for solar power fall rapidly, Gulf and Middle East states are reevaluating their power strategies, which currently rely subsidiaries for electricity generated with LNG. The UAE has set an “incredibly ambitious” clean power target, starting from scratch just a few years ago, according to Bloomberg New Energy Finance.

In September, Chinese panel maker JinkoSolar and Japanese developer Marubeni won a tender for a solar plant in Abu Dhabi with a record bid of 2.42 US cents a kilowatt-hour. About $1bn has been invested in utility-scale solar in the UAE since 2007.

Middle East states need to break their reliance on subsidised gas and oil power, where inefficiencies are endemic in the Middle East, Al-Mazrouei said.

“We have so many open-cycle power plants it doesn’t make sense to continue with them – they’ve very low efficiency,” said the former Abu Dhabi Investment Authority executive. “The reason they are there is because gas is subsidised.”

In future, the UAE will review every proposed LNG power project as a project that’s not subsidised, he said. The government also wants to drop support for power tariffs, he said.