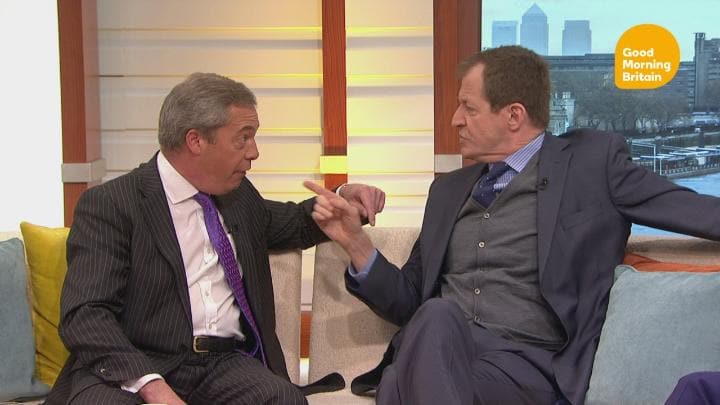 “Believe me, Brexit can be stopped”: Nigel Farage and Alastair Campbell row over Article 50

Alastair Campbell, who is now an editor at pro-Remain newspaper ‘The New European’, is a staunch and vocal Remainer.

Campbell commented: “The British people in a democracy, having yes expressed their will on June 23rd, have the right to change their mind, and I think they are changing their mind. As the Article 50 process starts and they realise that all of the things these guys promised, the money for the health service that Boris [Johnson] run around with his bus, staying in the single market, staying in the customs union they’ve all gone. When you actually boil it down, what we’re going to get out of Brexit it’s a little bit of immigration control, but not much, and it’s the European Court of Justice and I defy any of your viewers to name a single European Court of Justice ruling that made them angry.”

However, this angered Nigel Farage who accused him of “loathing democracy” and commented that people would still vote for Brexit if they were asked tomorrow.

Farage said: “The war is over. Come out of that fox hole, recognise it’s done.”

Campbell stuck to his guns by saying Brexiteers have committed “an act of economic and political suicide”.

Campbell said:  “Global Britain? Is the first step of a global Britain to come out of the biggest market in the world? How does that make any sense at all?”

Campbell added: “I am genuinely worried that we have committed and  you have helped bring about, an act of economic and political suicide and that we are going to go into rapid decline”

Campbell insisted: “We’re going to be a laughing stock.”

Controversially, Mr Campbell claimed: “Believe me, Brexit can be stopped.”

Farage argued that although the Leave campaign had lied about funds post Brexit and made false claims about remaining in the common market, it would still be worth the financial loses in order to be free from a European Laws and Courts, a move held by many as dangerously delimiting the power of the UK government without anything in place to redress abuses.

Campbell urged Farage to find a single person watching the show who had a genuine problem with any ruling that had ever come from the European Courts.