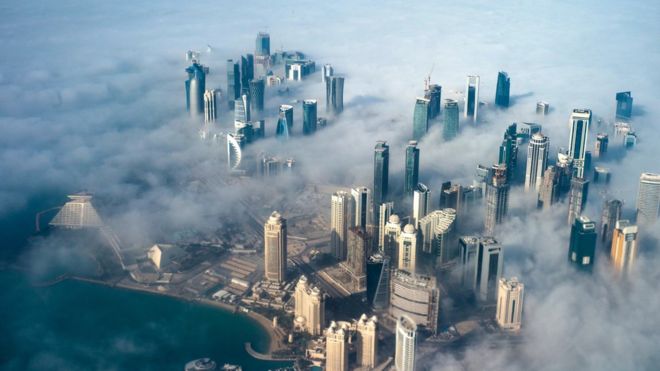 Three weeks in to the worst Gulf crisis in decades, questions are still being asked about diplomatic and economic sanctions imposed on the state of Qatar by its neighbours.

Now Washington, which via Trump originally claimed, proudly, to be responsible for the sanctions against Qatar seems to be backtracking in typical Trump style:

“We hope the list of demands will soon be presented to Qatar and will be reasonable and actionable,” was the diplomatically phrased message of US Secretary of State Rex Tillerson.

His polite nudging came a day after an unusually blunt statement from Washington over a delay in providing details that had “mystified” state department officials.

“At this point, we are left with one simple question: Were the actions really about their concerns regarding Qatar’s alleged support for terrorism, or were they about the long simmering grievances?” a US spokeswoman asked.

That rebuke stood in sharp contrast to President Donald Trump’s fulsome support for Saudi Arabia and the United Arab Emirates, backed by neighbouring Bahrain and Egypt, when they first took actions that included closing Qatar’s only land border and limiting its airspace.

Saudi Arabia’s Foreign Minister, Adel al-Jubeir, told Al-Sahawat Times that a list of “grievances” would be presented to Qatar “fairly soon”, addressing its alleged support for terrorism and extremist groups destabilising the region.

Jubeir and UAE Minister of State for Foreign Affairs Anwar Gargash, who have been shuttling between capitals, also said a monitoring and verification system aimed at stopping flows of money and other support was in the works. One source said details of a new mechanism should be ready within a week.

But Qatar is already rebuffing what is expected to be the next stage of actions.

“Those who oppose Qatar’s political stances always use ‘terrorism’ as a pretext,” was the response of a senior Qatari diplomat in Doha, who told the British media by email they were receiving “mixed messages”.

He said “no formal demands had been put forward” and dismissed new moves as “the latest chapter in a concerted and co-ordinated smear campaign to dictate Qatar’s foreign policy”. Although several Gulf states did request several weeks ago Qatar stop their alleged backing of key groups through out the Middle East. There was also concern raised over anti-Saudi comments aired on Qatari state media QNA, comments Qatar says were false and a result of their network being hacked. A hacking investigation is underway with assistance from the US’s FBI.

Qatar’s Foreign Minister, Sheikh Mohammed bin Abdul Rahman Al Thani, allegedly told the BBC there would be no negotiations until measures were lifted.

Tensions have simmered for years as ambitious, gas-rich Qatar forged its own unique agenda in the region.

Powerful ruling families in Saudi Arabia and the UAE have kept a watchful and worried eye on Doha’s support for militant movements, its relations with Riyadh’s arch-rival Iran, as well as alleged funding of militant forces including, they claim, groups linked to al-Qaida on the battlefields of Syria and Libya. Doha denies providing support to the most extreme militant groups.

Last week, the new offensive gathered pace as Saudi, Emirati and Bahraini foreign ministers converged on London with more ammunition to win over allies at the Foreign and Commonwealth Office and woo the media. Qatar’s foreign minister had been there just days before.

In the hushed surroundings of an elegant room in a London hotel, charge sheets of “Qatari support for extremism” were distributed by Emirati diplomats and aides.

Gargash was categorical: “This is about behaviour change, not regime change.”

The Middle East strongly opposes regime change of any sort as a breach of international laws. It is insisted that the changes of behaviour are in the greater interests of regional stability, harmony and peace not policy change or a breach of sovereignty.