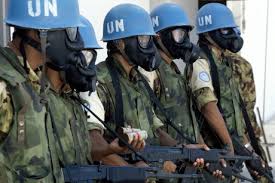 The UN Secretary General had pledged to rid the UN of the scourge of criminal activity at the hands of UN peace keepers.

The UN deploys peace keepers around the world to areas afflicted by natural disasters and war. They are there to protect civilians and deliver aid and assistance. Yet UN peace keepers continue to be accused of abuse and sex crimes.

Dutch UN peace keepers were tried at the Hague and found guilty of war crimes over the 1995 Srebrenica genocide in Bosnia where it was ruled that peace keepers wilfully allowed armed forces into a designated UN civilian safe zone leading to the torture, rape, mutilation and murder of over eight thousand Muslim children, women and men in one day.

There are many more cases however of UN peace keepers directly carrying out the atrocities directly themselves.

Despite vows to end  such criminal sub-culture at least 55 UN peacekeepers are accused of sexual exploitation and abuse of civilians across UN missions around the globe since January 2017, new UN data shows, including children and injured victims of war.

Data released late on Friday night also showed a new case of sexual exploitation was registered against Republic of Congo peacekeepers in the Central African Republic (CAR), less than 10 days after the United Nations announced the withdrawal of Congolese troops from the UN’s mission over a string of allegations of sexual exploitation and abuse.

On Saturday, a UN spokesperson confirmed that a new allegation had been registered against the Congolese but declined to clarify if the recorded case of sexual exploitation took place before or after the stated withdrawal of the battalion.

“The allegation was recorded in June […] an investigative process has been launched as per standard procedures,” Sophie Boudre, a spokesperson for Department of Peacekeeping operations, told Al-Sahawat Times

The international body has also been accused of burying cases and failing to act promptly or transparently to incidents perpetrated by its troops, peace keepers and aid envoys.

An AP investigation earlier this year found that around 2’000 allegations of sexual exploitation and abuse have been registered so far this decade.

In March 2017, the UN registered a total of 145 cases of sexual exploitation and abuse involving members of the UN in 2016 up from 99 in 2015. Since the beginning of 2017, there have been 33 recorded allegations involving 37 survivors, including six children.

In a leaked memo addressed to UN headquarters, Lieutenant-General Balla Keita of Senegal, head of the UN peacekeeping force in CAR, wrote that he had sent six letters to the battalion commander in 2017 over alleged sexual abuse, fuel trafficking, and lack of discipline.

Currently as of June 2017 the UN is operating in 16 official long term peacekeeping campaigns:

Since 1948 the UN has taken part in 71 campaigns, 16 of which are active today, many such as The Balkans, Palestine, Pakistan and Cyprus have been on going for many years and even decades. Troops in UN campaigns come from specialist military branches of the armed forces from 128 nations around the world.