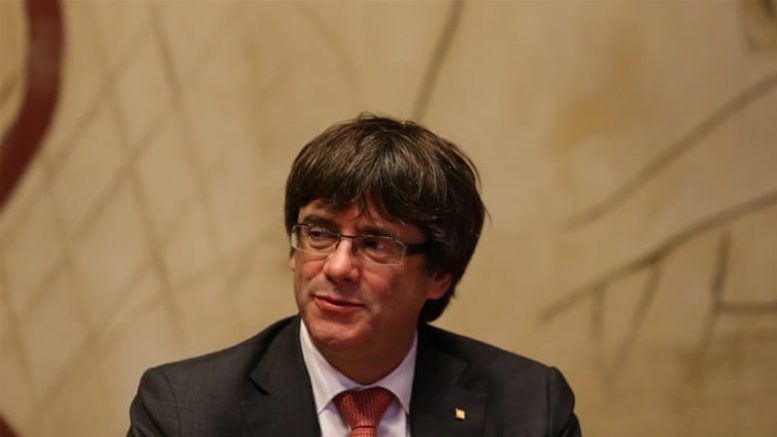 Former Catalan regional leader, Carles Puigdemont says he can’t return to Spain because a warrant is out for his arrest.

Ousted regional leader, Puigdemont denies he is seeking asylum in Brussels and says he will not return to Spain to face legal action nor give up on fight for Catalan independence.

Hot, last-minute and chaotic, ousted Catalan leader Carles Puigdemont’s first press conference since fleeing Barcelona for Brussels was a dramatic climax to the political crisis that has gripped Spain.

Amid speculation that he and members of his former cabinet would seek political asylum, fuelled by the comments of a Belgian minister, the former Catalan leader instead recommitted himself to the independence cause.

It is believed that Puigdemont and his colleagues drove across the border into France before flying to Brussels on Monday, after Spain took over control of the Catalan region’s government, police, media and public agencies.

Puigdemont said he could not return to Spain unless given clear assurances that he will be protected, accusing Madrid of being intent on “vengeance”.

He and his colleagues would stay in Belgium as long as their safety was not assured in Spain and would “continue our work despite the limits imposed on us.”

Insisting he remained the rightful leader of Catalonia, Puigdemont said his right wing PDeCAT party would nonetheless accept the challenge of regional elections called for 21 December “with all our strength” and vowed that Catalan separatists would come out to vote.

As he entered the building in Brussels, he walked past crowds of Belgium prot stars holding Spanish national flags and signs that read “Estado de Derecho” | “Rule Of Law”.

Five minutes from the headquarters of the European Commission, at the Brussels Press Club, Puigdemont declared he had fled to “the capital of Europe”.

Spain admonished Belgium’s migration minister Theo Francken yesterday for entertaining talk of political asylum, and there was some suggestion on Tuesday that the Belgian government had blocked Puigdemont from using the larger international press centre in the city, lest it be seen to be harbouring fugitives.

Puigdemont instead took questions from the world’s media in a packed-out presentation room that was well-over capacity.

Asked whether he would return to Spain to serve a possible 30-year jail sentence for sedition, gross miss conduct, miss use of public funds, endangering public life and rebellion, Puigdemont demurred and handed his microphone to one of his fellow fugitives.

After a brief pause, one of the other former ministers said: “Would a fair trial have this as a reasonable outcome? Ask this question and you will have the answer.” Heavily indicating that they would indeed be seeking political asylum in Belgium.

Despite previously dismissing the possibility of claiming asylum, the Catalan independence leader was also vague about how long he would stay in Belgium, if he ever did return at all to Spain.

“It depends on the circumstances, as long as we consider it necessary,” he said, switching throughout his presentation between English, Spanish, Catalan and French.

Puigdemont has hired a Belgian lawyer, Paul Bekaert, who has 40 years’ experience in human rights law, including blocking extraditions for people seeking to remain in Belgium.

If Puigdemont tries to fight his extradition to Spain to face charges, he could effectively be claiming asylum in all but name. Madrid could request the enforcement of a European Arrest Warrant, the system introduced in 2004 to ease extraditions between member states. But this would mark yet another dramatic escalation in this difficult and heated crisis. However for such serious charges it is likely a European Arrest Warrant would be successful.

Under International Law it is illegal to declare independence without a mutual agreement between the original country and the new counterparts.

It is also illegal to hold referendums against the laws of a nation.

Puigdemont’s illegal referendum only saw a 36%* vote in favour of independence, on which he further illegally declared formal independence.

The chief of police for Cataluña was also arrested after refusing to assist Spanish and pro union police officers trapped in a government building by armed Catalan separatist rioters.