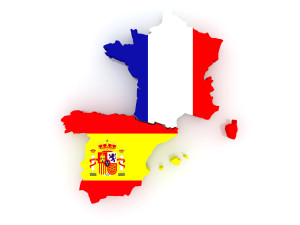 Map of France and Spain. 3d

The Island that changes country every six months

This week, France handed over 3’000 sq m of its territory to Spain without a single shot being fired.

But in six months’ time Spain will voluntarily hand back the land to France. As had been the way for more than 350 years.

The French Basque beach resort of Hendaye is the last town before the border with Spain.

Out of season, its beautiful curved sandy bay seems to be occupied by hundreds of seals. But look more closely and they are, in fact, defiant winter surfers in wetsuits.

Just beyond the long breakwater is the historic Spanish town of Hondarribia and its sprawling, urban neighbour Irun.

The natural border is the river Bidassoa, which flows into a basin dividing the two countries.

As you venture upstream from the river mouth, away from the French and Spanish Basque Country inland the view changes. Imposing and colourful Basque buildings give way to industrial warehouses on the French side, and residential tower blocks on the Spanish side.

But what we have come to see is Pheasant Island (in French Ile des Faisans, in Spanish Isla de los Faisanes). It’s not easy to find. When you ask for directions, few understand why you may want to go there.

Locals will tell you there is nothing to see and warn you that you can’t visit it, no-one lives there, it’s not a tourist destination like Mont St Michel they will say.

But there it is a peaceful, inaccessible island in the middle of the river, with tree cover and neatly trimmed grass, and an old monument which pays tribute to a remarkable historical event that took place here in 1659.

For three months, the Spanish and French negotiated the end to their long war. These negotiations took place on the island, as it was considered neutral territory.

Wooden bridges were extended from both sides. The armies stood ready as the negotiations began.
A peace agreement was signed, the Treaty of the Pyrenees.

Territory was swapped and the border demarcated. And the deal was sealed with a royal wedding, as the French King Louis XIV married the daughter of the Spanish King Philip IV.

One other detail was that the island itself was to be shared between the two countries, with control rotating from one to the other.

For six months of the year, from 1 February to 31 July, it’s under Spanish rule – and for the following six months it’s French.

This sort of joint sovereignty is called a condominium territory, and Faisanes/Faisans Island is one of the oldest still in existence.

The naval commander in the Spanish town of San Sebastian and his French counterpart in Bayonne act as governors or viceroys of the island.

In reality they have bigger fish to deal with, so it’s up to the Mayors of Irun and Hendaye to take turns looking after the island.

Benoit Ugartemendia runs the parks division for the local council in Hendaye. He explained how he sends a small team once a year by boat to the island to cut the grass, trim the tree branches and that’s about it.

The river is tidal – you can sometimes reach the island by foot from Spain, so as well as cutting the grass, the Spanish police chase off illegal campers.

The island is tiny, just over 200m long and 40m wide. Very occasionally, the public is invited to visit on heritage open days, but Benoit says it only seems to interests older people and younger people know nothing of its historical importance.

These days, crossing from France to Spain by land is a seamless experience except for the gridlocked traffic – but under the Franco dictatorship, the border was heavily policed. The Mayor of Hendaye, Kotte Ecenarro, told me there used to be sentry points every 100m along the river facing the island to prevent opponents getting in or out.

These days, the mayors of Irun and Hendaye meet about a dozen times a year to discuss issues like water quality and fishing rights. In the past, Spanish fishermen have complained about the shape of French boats and lately have been upset with French holiday makers in canoes disrupting their business.

The island itself is a low priority. It’s being eroded by river tides and has lost nearly half of its size over the centuries, as snow melt rushes down from the Pyrenees and into the river. But neither country wants to spend money building up the island’s defences. It is likely that eventually the island will simply dissolve into the river itself.

This year, there will be no ceremony marking the handover. There was an idea to fly the flag of whichever country was currently in but Mr Ecenarro explained that until recently, that would only have encouraged the Basque Separatists to take it down or replace it with their own. So in a few days’ time, perhaps the world’s most undisputed border island will change ownership again. And in August Spain will hand it back once more with no ceremony, fanfare, confrontation nor protest. 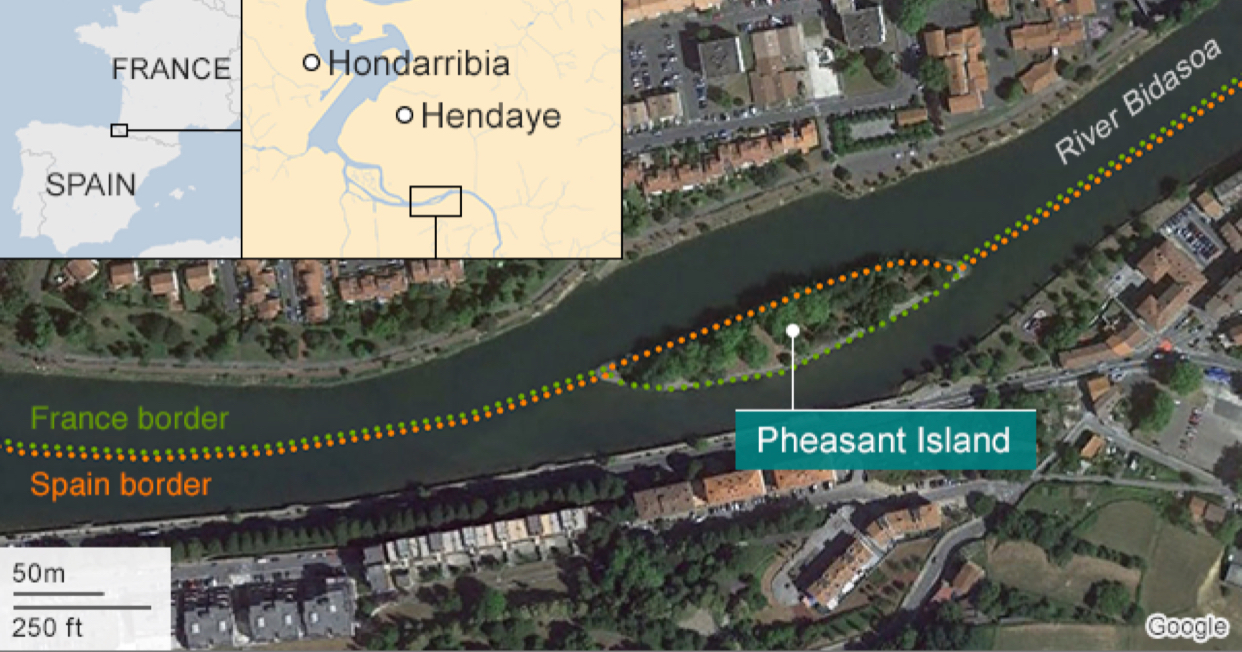