A beauty blogger, who has amassed over 124’000 followers on her Instagram page for openly posting pictures of her acne troubles, was left disappointed after being dropped by L’Oréal because of her “skin issues”.

Khadeeja Khan, from Birmingham, was initially approached by the cosmetics giant asking her to be involved with the launch of a new vegan hair dye range, which included a trip to Paris.

However, the beauty products company later backtracked on heir offer after which she received an email from them which stated, “L’Oréal can’t be working with people with skin issues.”

She even shared some snippets of the mail on her official Instagram page, emeraldxbeauty, and captioned it, saying, “To think we’re supposed to live in an advanced society that not only ACCEPTS of ALL walks of life but actually embraces people of all backgrounds, religions, ethnicities and disabilities. Shame on you, L’Oréal.” 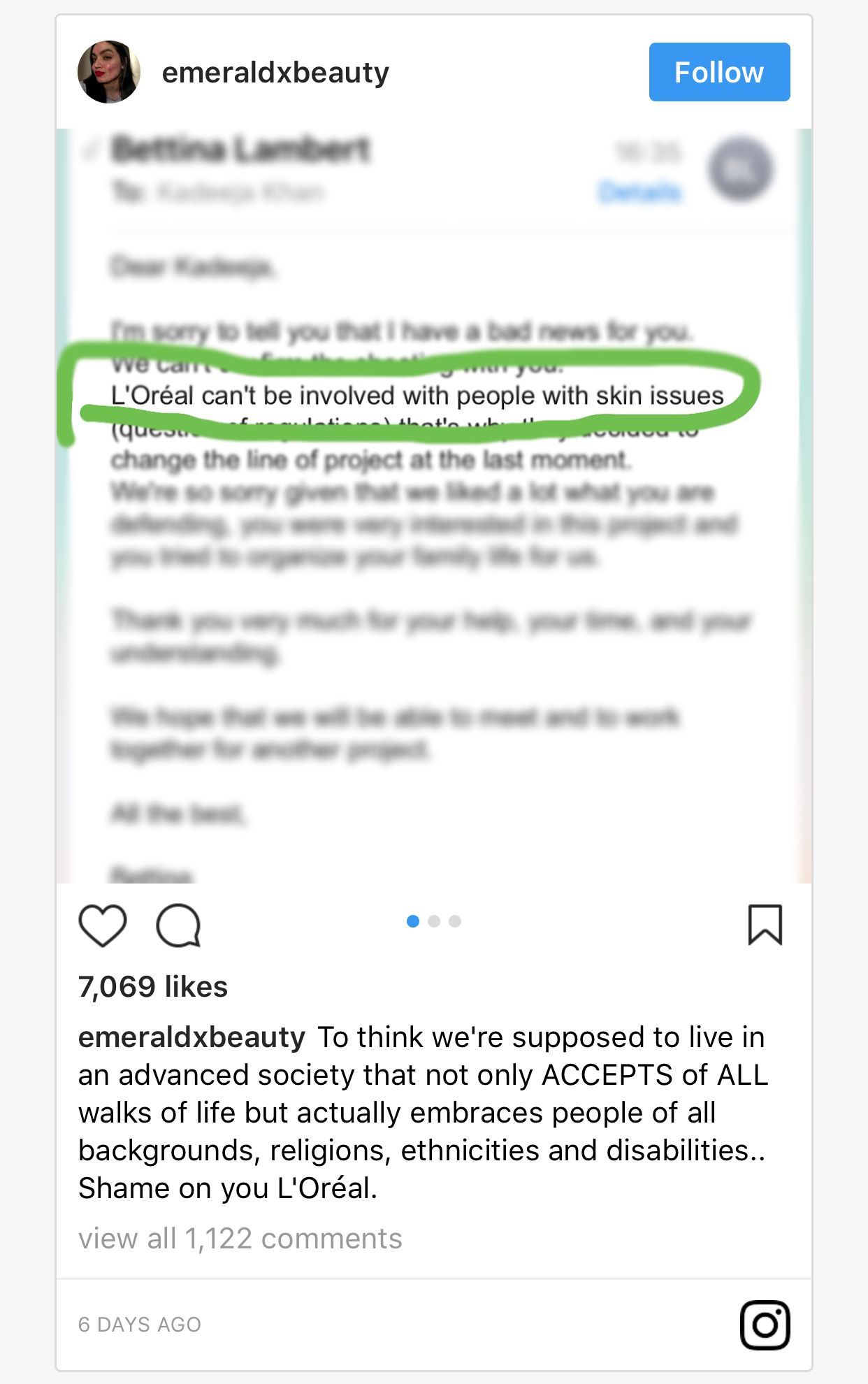 Khan spoke to the press about L’Oréal’s snub, admitting, “It’s honestly such a shame. I love L’Oreal and their products and was really excited when they reached out to work with me. But after I’d already got my hopes up, I was completely let down and insulted by their reason for not wanting to work with me.”

She continued by saying, “It just shows that L’Oreal only want to work with people with perfect skin, but that isn’t real. They are promoting an image of perfect beauty that simply isn’t real.”

Khan says she had already agreed to take part in the campaign when a L’Oreal employee emailed her. She was stunned to be told, “L’Oreal can’t be involved with people with skin issues (question of regulations), that’s why they decided to change the line of the project at the last moment.”

Detailing her shock, she told the British outlet, “I was really gobsmacked when I read the message from this woman. My whole Instagram is about sharing unedited photos, and I am very honest about my acne.

“I don’t know why they would get my hopes up just to let me down – they were the ones to reach out to me, not the other way around.”
L’Oreal released a statement later, apologising for the “unfortunate misunderstanding”.

A spokesman for the cosmetics company said, “We deeply apologise for any upset caused, and have made direct contact with the individuals involved to clarify this unfortunate misunderstanding. The photoshoot was designed to support a new hair colour launch and feature hairdressers and lifestyle bloggers.

“Unfortunately, a misunderstanding resulted in the agency casting bloggers with skin concerns for this shoot,” he said.

The statement further clarified by adding, “This resulted in the wrong profile being cast, which was then poorly and insensitively communicated to the individuals concerned. We do not have regulations in place that restrict us from working with people with skin conditions.

“At L’Oréal, we work with women and men with all skin types and celebrate beauty in all its diversity.”