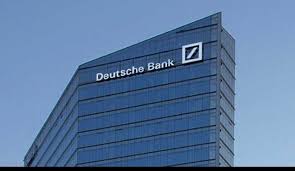 Deutsch Bank paid $35b to the wrong person

The bad news at Deutsche Bank AG just got worse.

Amid weeks of long leadership tussles that claimed the scalps of the chief executive, two of his top lieutenants and tainted its chairman, the bank inadvertently transferred 28 billion euros ($35 billion) to one of its outside accounts, Bloomberg News has revealed.

While the blunder was quickly reversed and caused no direct financial harm, it’s a stark reminder of the vulnerability of even the most sophisticated financial firms. For Deutsche Bank, the mistake comes at a delicate time as the new CEO, Christian Sewing, seeks to convince investors the bank can now return to growth. His predecessor, John Cryan, had already tackled an improvement in controls that had failed the lender in the past.

“Fat-finger incidents are common within banks but automated controls should prevent their execution,” said Michael Huenseler, a portfolio manager at Assenagon Asset Management, which owns Deutsche Bank stock. “The shocking amount in the case of Deutsche Bank points to deficiencies in the bank’s IT functionalities, which lends new weight to Kim Hammonds’s critical remarks and raises urgent questions about the potential costs of changing the systems.”

COO and IT chief Hammonds will leave the bank in May ‘by mutual agreement’, the board said earlier this week. A veteran of Boeing Inc. and Ford Motor Co., Hammonds had ruffled feathers by calling the bank “the most dysfunctional company” she’d ever worked for at an internal meeting. She never disowned the comments after they leaked to the press.

The routine payment that went awry last month was one that Germany’s biggest lender unintentionally sent to an exchange as part of its daily dealings in derivatives, a person familiar with the matter said. However, the incident didn’t contribute to the dismissal of either Hammonds or Cryan, two people with knowledge of the matter said.

The errant transfer occurred about a week before Easter as Deutsche Bank was conducting a daily collateral adjustment, the person said. The sum, which far exceeded the amount it was due to post, landed in an account at Deutsche Boerse AG’s Eurex clearinghouse, temporarily boosting the collateral held by the world’s fourth-largest clearinghouse by more than half.

“This was an operational error in the movement of collateral between Deutsche Bank’s principal accounts and Deutsche Bank’s Eurex account,” Charlie Olivier, a spokesman for the lender, wrote in an emailed statement. “The error was identified within a matter of minutes, and then rectified. We have rigorously reviewed the reasons why this error occurred and taken steps to prevent its recurrence.

It’s another misstep for Deutsche Bank after its third straight annual loss and when, in common with other lenders, it faces increased scrutiny from regulators. Cryan, who was CEO for three years, said in a speech earlier this year that the bank was approaching the end of “phase 1” of his restructuring, which bolstered internal controls and shrunk the number of operating systems at the bank to 32 from 45.

Deutsche Bank shares, which have fallen 27 percent this year, were down 1 percent to 11.57 euros as of 5:00 p.m in Frankfurt, underperforming both the benchmark German DAX index and sectoral peers in Europe. Analysts at cross-town rival Commerzbank Thursday slashed their target price for the stock from 15 euros to 11, calling it the “cactus among investment banks” because it’s “spiky and slow growing.”

“A bank mistakenly making such a large transfer shows its controls aren’t working adequately, and it’s embarrassing,” said Dieter Hein, an analyst at Fairesearch who has the equivalent of a sell recommendation on the bank’s stock. “This kind of incident shows that the bank’s problems are so big that you can’t fix them immediately. Cryan failed.”

Hein also said Hammonds bears some of the blame given her involvement in Cryan’s information-technology revamp.

The error should have been caught by an internal fail-safe system known as a “bear trap,” a person familiar with the matter said. The mechanism was set up after an internal audit at the bank triggered by an earlier collateral payments error in March 2014, the person said.

While such errors do occur, the amount involved — more than the bank’s market value of around 24 billion euros — is highly unusual, according to the person.

Deutsche has had other problems with payments in recent history too. In June 2015, a junior member of its Frankfurt-based foreign exchange sales team mistakenly sent $6 billion to a U.S. hedge fund client. The bank recovered the money a day later.

After receiving the unexpected money, Eurex held back 4 billion euros of Deutsche Bank’s funds over the weekend of March 23, the person said. Two other people familiar with the matter said the error occurred a week earlier. A spokesman for Deutsche Boerse said the company doesn’t comment on single transactions or client relationships.

Sewing is seeking to turn around the worst-performing member of the Stoxx 600 banks index this year. Analysts have said his appointment raises questions about the lender’s future direction, especially the under-performing investment bank business.

The event may further sharpen the focus of the bank’s supervisors. The European Central Bank has asked Deutsche Bank to simulate an orderly wind-down of its trading book, Chief Financial Officer James von Moltke told Bloomberg Monday. It’s the first to receive such a request from the ECB, according to a person familiar with the matter, who said the ECB is using Europe’s largest investment bank as a “guinea pig” before it sends similar requests to other banks.

Chief Regulatory Officer Sylvie Matherat said in an interview with German media that the bank will bolster its department for compliance, regulatory issues and fighting corruption by another 400 people by year-end, making it 3’000 strong.