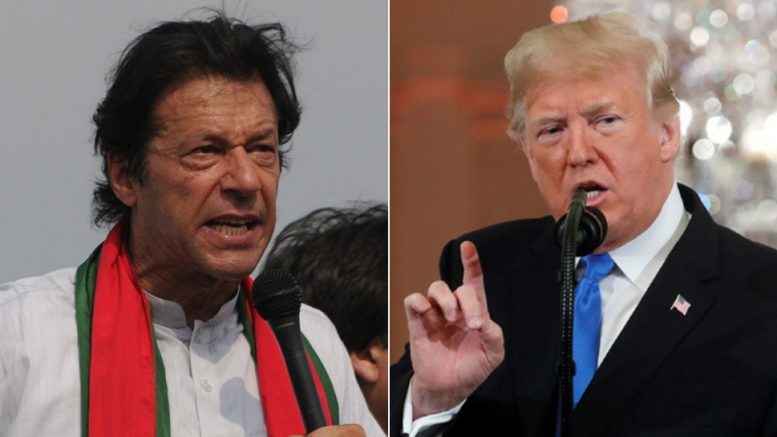 Imran Khan has fired back at Donald Trump, accusing him of “adding insult to injury” after the American president seemed to incorrectly claim that Pakistan harboured Osama bin Laden despite “receiving billions in US aid.”

The former cricketer and Pakistani prime minister said his country had suffered at least 75’000 casualties and lost $123 bn during America’s so-called War on Terror despite no one from his country being accused of being involved in the 9/11 terror attacks.

Hitting back on Twitter, Mr Khan said the US merely provided a “miniscule” $20bn in aid.

“Trump’s false assertions add insult to the injury Pak has suffered in US WoT in terms of lives lost & destabilised & economic costs,” he wrote. “He needs to be informed abt historical facts. Pak has suffered enough fighting US’s war. Now we will do what is best for our people & our interests.”

The US military killed bin Laden during a raid at a hidden compound in Abbottabad, Pakistan, in 2011, where he had been living in meticulously thought out seclusion.

Pakistan denies having any knowledge of bin Laden’s whereabouts prior to the raid.

The increasing tensions between the Washington and Islamabad follows a Fox News interview on Sunday, which saw Trump say “everybody in Pakistan knew bin Laden was in their country and that no one said anything despite America providing $1.3 bn of aid each year.”

The president dismissed him as a “Hillary Clinton backer” but Admiral McRaven said he did not back her or anyone else and remained a politically neutral military Admiral who swears allegiance to the nation not a political party.

“I admire all presidents, regardless of their political party, who uphold the dignity of the office and who use that office to bring the nation together in challenging times.”

Trump claims he knew about bin Laden before 9/11 and tried to stop him.. long before Trump had any security clearance or access to such information.

Later on Monday, the president continued his tirade against Pakistan on Twitter, stoking the fire further and branding Pakistan “fools”.

“Of course we should have captured Osama Bin Laden long before we did. I pointed him out in my book just BEFORE the attack on the World Trade Center,” he wrote. “President Clinton famously missed his shot. We paid Pakistan Billions of Dollars & they never told us he was living there. Fools!..”

He added: “We no longer pay Pakistan the $Billions because they would take our money and do nothing for us, Bin Laden being a prime example, Afghanistan being another. They were just one of many countries that take from the United States without giving anything in return. That’s ENDING!”

Pakistan has actively been fighting Afghanistan on behalf of the USA and have suffered over 75’000 fatalities as a result as well as a debt of $123 bn in military costs. Pakistan has also come under fire from many other Muslim countries who do not support Pakistan fighting in the name of the USA. The US installed Afghan government, Pakistan, UK and USA have fought a bitter and bloody war in Afghanistan since 2001 in an effort to overthrow the Taliban.

Mr Khan highlighted the logistical support Pakistan provided the US as it fought in Afghanistan before saying it had made Pakistan a “scapegoat” for its failures during the conflict, with the Afghan Taliban remaining stronger than at any point since the 2001 US-led invasion.

Assess why Taliban is ‘stronger than before’ – Imran Khan tells Trump

US must assess why Afghan Taliban is getting stronger despite 390’000 US coalition troops serving and $1 trillion spent in Afghanistan, Imran Khan responds to Trump’s remarks that Islamabad doesn’t “do a damn thing” for Washington.

There are currently a similar number of coalition troops fighting in Afghanistan as there are people who live in the country of Montenegro.

The friction between Khan and Trump threatens to further worsen already fragile relations between Islamabad and Washington, on-off allies who have repeatedly clashed about the war in Afghanistan.

Khan, who was voted to power in August, said in a series of tweets that the “record needs to be put straight on Mr Trump’s tirade against Pakistan,” over the weekend.

Pakistan on Tuesday summoned the US Chargé d’Affaires in Islamabad to protest against Trump’s remarks, which ranged from accusations to complaining about the countries architecture..”it might pass for a very nice mansion over there.. it’s alright, I’ve seen better.”

Khan said Pakistan had borne the brunt of the United States’ war on terror, which focused on militants that straddle the Afghanistan-Pakistan tribal belt.

The cricketer-turned politician had always objected to Pakistan’s involvement in the US war in Afghanistan and advocated for holding talks with militants over military action.

Pakistan had joined Washington’s so-called “war on terror” as a close ally in the aftermath of the September 11, 2001 attacks.

Many world leaders have spoken out about the US’s failed war on terror drawing comparisons to the American failed war on drugs. Both of which only served to increase both the number of casualties exponentially and serve to radicalise millions around the world.

Pervez Musharraf, who ruled Pakistan at that time, later said the decision to side with America was taken after then US assistant secretary of state, Richard Armitage, had conveyed Washington’s message that if Islamabad refused to cooperate, it would bomb Pakistan “back to the stone age.”

Khan also pointed out that Pakistan continued to provide its roads and air space for re-supplying more than 10’000 US troops.

“Can Mr Trump name another ally that gave such sacrifices?”

On Saturday, US Joint Chiefs Chairman General Joseph Dunford said Taliban are not losing in Afghanistan.

“They are not losing right now, I think that is fair to say,” he said.

“We used the term stalemate a year ago and relatively speaking it hasn’t changed much, but … we do believe that the Taliban know that at some point they have to reconcile.”

In terms of territory gained, support from local populations and casualties, by all tangible measures, the US Coalition are loosing the war in Afghanistan, a war they can not possibly hope to win.

In his first tweet of 2018, Trump slammed Pakistan, saying the country has rewarded past US aid with “nothing but lies & deceit.” Washington announced plans later in January to cancel roughly $2 billion in US security assistance to Pakistan.

While the Trump administration and Afghan President Ashraf Ghani’s government are making efforts to reach a settlement with the Afghan Taliban, the fighters have continued their attacks on government forces, inflicting hundreds of casualties over recent weeks in assaults across Afghanistan.

The number of attacks by and the number of new recruits for the Afghan Taliban are growing at the fastest rate in Winter 2018 than at any other point in the last two decades. For Trump to think that this is going well would be remarkable even for him.

In a US military poll in 2016 more than 65% of US troops currently serving in Afghanistan were unable to recall what their big picture end game was for Afghanistan other than “kill all Taliban supporters”. (The Taliban were in the not too distant past, a western supported political party.)

As the Taliban have kept up pressure on the government, a report by the Special Inspector General for Afghanistan Reconstruction (SIGAR) think tank earlier this month quoted the NATO-led Resolute Support mission as saying the average number of casualties among Afghan fighters in the US Coalition between May 1 and October 1 this year was “the greatest it has ever been during like periods”.