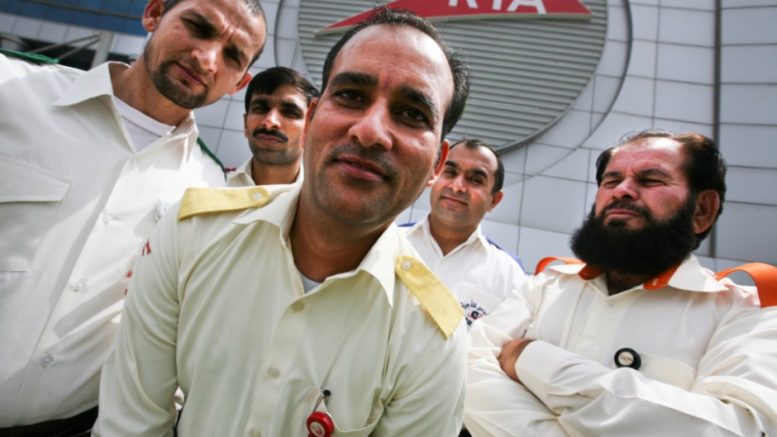 In a bid to encourage good and honest taxi drivers in Dubai, the Roads and Transport Authority (RTA) recently rewarded them with a ‘Taxi Services Excellence Award’, carrying a 5’000 AED reward.

There are 20’000 cabbies driving 9’170 taxis in Dubai. They work 12 hours a day and are remunerated on a commission basis with fairs going directly to the franchises.

“The least we can do is recognise their efforts by rewarding them every year. This year we also introduced safety awards for Dubai cabbies for the very first time,” Yousif Mohammad Al Ali, Member of the Board and chief executive officer, Public Transport Agency (PTA), explained.“We picked the best drivers on the basis of customer satisfaction and driver safety. It was pleasant to see drivers working with us for years without any accident or fines,” said Ali.

Five winners of the Taxi Services Excellence Award are portrayed below to show what sets them apart.

Bakthi Rasool Ahmad Pakistani (32), Arabia Taxi
Bakthi, who clocks an average 7’142 kilometres a month has been rewarded for his honesty and zero accidents and fine record. “People think taxi drivers in Dubai are an angry lot. That is not true. We are good drivers doing our best to please our passengers. Sometimes it can be hard to please everyone. Some people take offence if you talk to them, some take offence if you don’t talk to them. Some people also don’t like it if you turn back and look at them when they are taking out cash to pay us. We have to take care of many things while driving passengers. I hope people will understand our efforts,” he said.

Mohammad Farooq Pakistani (24), Dubai Taxi Corporation
Mohammad clocks 7’814 kilometres per month and has had no accidents or fines till date. “It is hard work but very rewarding at the end of day. Every driver has a target to make 350 AED a day in order to be eligible for a commission. I am young and I have the energy to put in a lot of hard work. I follow traffic rules seriously. Sometimes customers ask me to speed up. I politely refuse and make them aware of the traffic safety rules in the city.”

Hassan Ali Khan Indian (38), National Taxi
Hassan was chosen for his hard work and honesty. He has been rated high on customer satisfaction after proving his honesty and returning lost items left in his cab. “I picked a customer from Al Sufouh Road and dropped him in JBR’s The Beach. He forgot his mobile in the taxi. I did not notice it until the next passenger who sat in my taxi pointed it to me. I waited for the person to call and when he did not, I went and handed the mobile to the police station. Another time, I took a passenger from JLT and dropped him at Ibn Battuta Mall. He left his wallet behind in the taxi which I noticed at the end of my day’s work when I was cleaning my car. I recognised the passenger from his driving licence in the wallet. Luckily I remembered a conversation he was having with someone that he was visiting a clinic in Ibn Battuta. The next day I went to the clinic and confirmed he had been there. Three days later this person called me on my cellphone and said he wanted to meet me. He rewarded me with 2’150 AED cash and told me this was the money in his wallet he forgot in my taxi.”

Iftikhar Ali Pakistani (35), Cars Taxi
Iftikhar is the first taxi driver to win RTA’s safety award this year. In the last five years he has had a clean record with zero accidents and fines. His honesty and high customer satisfaction were other reasons he won the Taxi Service Excellence award. “I am honoured to have won two awards from RTA. I have been driving cabs in Dubai for the past five years. I have a clean record with zero accidents and fines. I follow the traffic rules and wear a smile on my face all the time.”

Lalpor Khan Ghalib Pakistani, (55) Metro Taxi
Lalpor has been driving taxis in Dubai for nine years. “I have not had even one accident or incurred a fine in these years. Customer satisfaction is also important to me. Taxi drivers in Dubai are very honest and this was told to me by a passenger who sat in my cab. He said he read somewhere that Dubai taxis are one of the safest to use in the world,” he said with pride.