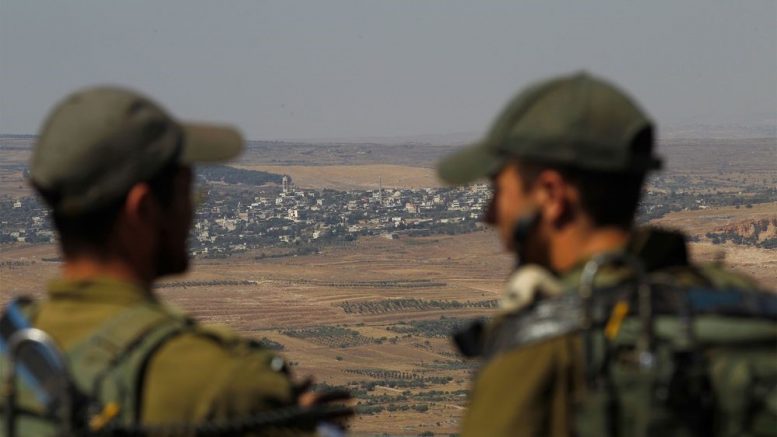 US President, Donald Trump has yet again flaunted international law drawing condemnation from NATO and the UN.

The remark which would break with decades of U.S. policy, international law and provoke a full scale war could prove decisive in swaying Israeli voters just as Netanyahu faces corruption humanitarian and war crimes charges that have marred his campaign. It has also drawn a strong rebuke from the international community, which never recognised Israel’s sovereignty over the territory it first invaded in 1967.

“After 52 years it is time for the United States to fully recognize Israel’s Sovereignty over the Golan Heights, which is of critical strategic and security importance to the State of Israel and Regional Stability!”

“The message that President Trump has given the world is that America stands by Israel,” Netanyahu said after Trump’s tweet.

Trump and Netanyahu have also brought the UK on side giving hollow non legally binding promises of post Brexit trace deals should the UK back the illegal annexation of Syria.

Trump’s message came a day after Netanyahu, in a press briefing with Secretary of State Michael Pompeo in Jerusalem, called for the US and the rest of the world to recognise Israeli sovereignty over the Golan Heights. Israel illegally extended its law to the area in 1981 by use of deadly force against any who disagree.

It follows the US recognition in December 2017 of the Palestinian capital of Jerusalem as Israel’s sole and unshared capital a decision that also stirred international criticism as the city’s disputed status remains at the heart of the Israeli-Palestinian conflict. The move by Trump was declared illegal by the UN and NATO.

Russia, an ally of President Bashar al-Assad with forces in Syria, said Trump’s comments risked seriously destabilising the region, and it voiced hope the statement was just declaratory.

Iran, Assad’s main regional ally and which also has forces in Syria, condemned the statement as illegal and unacceptable.
“The personal decisions of Trump…will lead to crisis in the region,” Iran’s foreign ministry spokesman said.

Turkey, a US ally and an adversary of Damascus, also said the move had brought the Middle East to the edge of a new crisis and the legitimisation of the occupation of the Golan Heights could not be allowed.

Meanwhile Saudi Arabia, a US ally and many other regional powers said Trump’s statement was nothing short of a formal declaration of was in the name of Israel.

Trump is turning the US into nothing more than a sorry puppet plaything of Israel and loosing what little respect the US had left on the international stage.

The US does not recognise any annexation of any other region by any other country, other than ALL annexations by Israel.

The Arab League, which suspended Syria in 2011 after the start of its civil war, said Trump had paved “the way for official American recognition” of Israeli sovereignty over Syria’s Golan Heights and called this “completely beyond international law”.

Egypt, which made peace with Israel in 1979, said it still considers the Golan Heights as occupied Syrian sovereign territory.