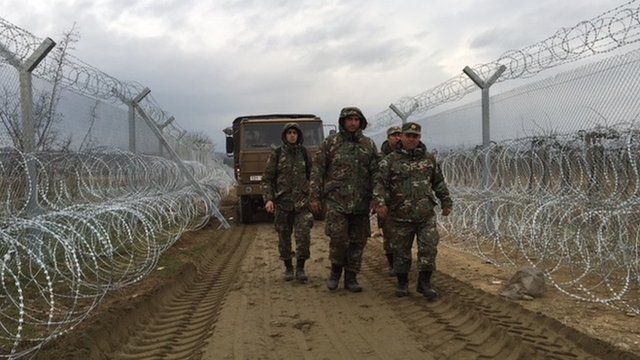 Macedonia: On Friday there were clashes with Greek police and tear gas was fired as convoys of people walked towards the border

Migrants started to pack their belongings and move on from a field in northern Greece after a failed attempt to enter Macedonia.

Just a few tents remained on the makeshift site in Diavata as people boarded buses to return to organised camps.

The migrants had turned up in the area last Thursday after rumours on social media that onward travel restrictions had been lifted and planed for a mass crossing.

Those reports, of course, turned out to be false and the migrants came up against Greek riot police.

On Friday there were clashes and tear gas was fired as convoys of people walked towards the border.

Tens of thousands of refugees and migrants, mainly from Syria, Iraq and Afghanistan, remain stranded in Greece after Balkan countries shut their borders in 2016. That route was the main passageway to the EU. Although Greece is an EU member it is surrounded by non EU nations in the form of the Balkan States and Turkey. Many refugees and migrants have to leave Greece who’s economy is still struggling to recover form the 2008 global economic crash and attempt to cross the war torn Balkan States to reach “EU proper” to seek refuge, asylum and a better life.

Turkey and the Balkan States who have border disputes with Greece fell out with the EU over the refugee crisis and as a result shut their borders to Greece in 2016. Macedonia in particular is not open to aiding Greece in this matter. Southern Macedonia which is under Greek control has been a source of contention between the two countries ever since North Macedonia gained independence from Yugoslavia in the 1990s and sought to unify with South Macedonia, which Greece refused to relinquish.