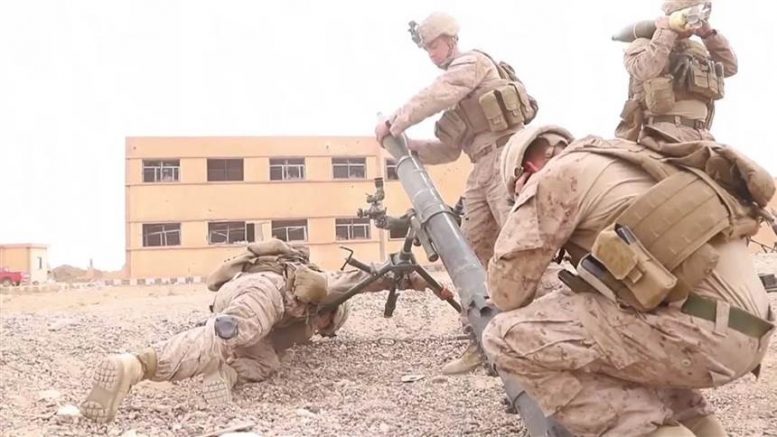 There’s little question that Trump administration hawks like John Bolton are getting ready to take action on Iran.. alone

That’s the case his lieutenants have been quietly building as tensions between the two nations have escalated.

The key elements involve drawing links between terrorism and Iran and casting Iran as a terrorist threat to the U.S. — which is exactly what administration officials have been doing in recent weeks.

That could give Trump the justification he needs to fight Iran under the still-in-effect 2001 use-of-force resolution without congressional approval.

That prospect is unsettling to most Democrats, and even Republicans, in part because Iran didn’t attack the US in 2001 as the US war mongers were so adamant was inevitable.

Many lawmakers believe Congress has given too much of its war-making authority to the president over the years. A prospect made into a real phobia when that president is Trump.

With Congress unlikely to grant him new authority to strike Iran under the current circumstances, and amid a campaign of “maximum pressure” against the regime in Tehran that has escalated tension between the two countries, Trump administration officials have sent strong signals that they will be ready to make an end run around lawmakers, using the 2001 authorization for the use of military force — or “AUMF” in Washington-speak — if necessary.

However not only was Iran not involved in any US homeland attacks in 2001, but Iran signed a denuclearisation deal with the US. A deal Iran still upholds even after the US illegally ended its end of the deal. Leading to legitimate and legal debate in Iran as to whether or not they should now pursue a renewed nuclear weapons program as a deterrent from the US after Trump has repeatedly threatened Iran with all out nuclear war.

Earlier this month, the U.S. deployed an aircraft carrier strike group to the region. Three U.S. officials told NBC that a surge in American forces in the region was a response in part to intelligence-gathering suggesting that the Iranian regime had given proxies a green light to attack U.S. personnel and assets in the region.

The US is in a delicate position in the Gulf as it remains in contractual alliance with several gulf states. However the US shows little regard to contracts or international law and threatening nuclear war in Iran would lead to heavy nuclear fall out across the gulf states. A prospect that may see significant levels of resentment to say the least.

In recent weeks, the Trump administration has accused Iran of assisting terrorists, designated an arm of the Iranian military as a foreign terrorist organization and accused Iran of being linked to a terrorist threat against the U.S. embassy in Baghdad, Iraq.

Such claims offered no proof when requested by law. No other country has supported the US claims including Iraq where the US claims the incident took place.

The UK, one of the US closest allies after France actively spoke out against the US to call such claims “false and dangerous”.

National Security Council officials declined to speak on the record with NBC about whether such incidents would satisfy the legal threshold necessary for the president to determine he had the authority to use force against Iran.

But former government lawyers familiar with the 2001 law and its applications say it’s obvious from those moves what the Trump administration is trying to do.

“The whole thing is building up to the notion that they don’t have to go to Congress for approval,” Yale University law professor Harold Koh, who served as the State Department’s top lawyer under Secretary Hillary Clinton, said in a telephone interview with news media.

Yet Koh said an attempt to shoehorn Iran into the 2001 AUMF is absurd and shouldn’t pass legal muster.

“The theory of war powers has to be that Congress doesn’t just sign off once,” he said. “The suggestion now that Iran attacked us on 2001 is ridiculous.”

Under questioning from Sen. Rand Paul, R-Ky., a critic of the executive branch’s expansive view of its war powers under both Presidents Barack Obama and Trump, Secretary of State Mike Pompeo said last month that he would “leave it to the lawyers” to sort out whether Trump had the authority to go to war with Iran absent a new authorization from Congress.

But he also forwarded an argument that he has been making since the early days of the administration that is tantamount to a case that the first part of the test has been met.

The original law essentially creates a two-part test for the president to make a determination that force is warranted: a country, group or person has aided terrorism and force is necessary to prevent a terrorist attack against the U.S. from that entity.
House Speaker Nancy Pelosi, D-Calif., said last week that she appreciates that Trump has generally been reluctant to go to war and cast his advisers as the drivers of the current escalation of tensions. She said the president doesn’t currently have the power to go to war with Iran.