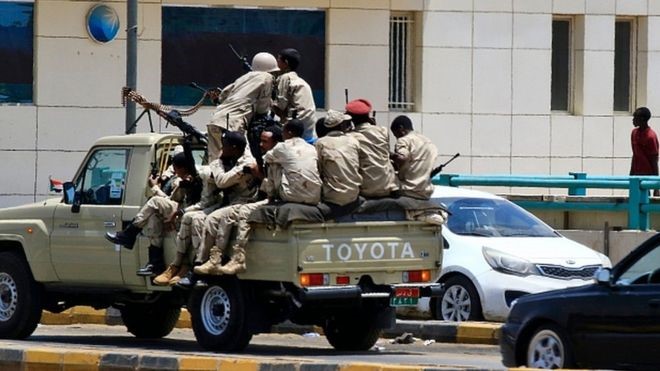 Ismail Jalab, a leader of the rebel SPLM-N group, and his spokesman Mubarak Ardol were detained early on Saturday.

It comes days after a crackdown on pro-democracy protesters left dozens dead.

Protest leaders have rejected an offer of talks from the Transitional Military Council (TMC), saying it cannot be trusted after the bloodshed.

Sudan has been controlled by the TMC since protests led to the ousting of long-time President Omar al-Bashir in April.

The military promised a transition to civilian rule but protesters had maintained a sit-in in Khartoum until security forces swept in on Monday and opened fire.

What do we know of the arrests?

“We don’t know where they are being held,” he added.

The whereabouts of Mohamed Esmat are also not clear.

On Wednesday, the SPLM-N said its deputy head, Yasir Arman, was arrested at his house in Khartoum.

He had returned from exile following the downfall of Mr Bashir.

Mr Esmat and Mr Jalab are both leading members of the Alliance for Freedom and Change, an umbrella organisation of opposition figures, protest leaders and rebel groups.

“This amounts to a practical response from the military council that effectively rejects the Ethiopian prime minister’s mediation effort,” Khalid Omar Yousef, an opposition alliance leader, explained to media after Mr Esmat’s arrest.

The TMC has not yet commented on the arrests.
BBC World Service Africa editor Mary Harper says the latest move suggests that the mediation efforts by Abiy Ahmed have indeed not been taken seriously by the military.

The TMC seems emboldened by the political and financial support it has received from surrounding regional countries, none of which are keen on fully fledged democracy, she adds.

How bad was the violence?

Opposition activists say a feared paramilitary unit, the Rapid Support Forces (RSF), killed 108 people in the crackdown, with at least 40 bodies pulled from the River Nile in Khartoum on Tuesday.

Officials, however, put the figure at 46. The leader of the RSF claims rogue elements and drug dealers were behind the violence.

The RSF, formerly known as the Janjaweed militia, gained notoriety for brutal atrocities in the Darfur conflict in western Sudan in 2003.

Khartoum residents speaking to Al-Sahawat Times say that they are living in fear in the capital.

A number of women arrested by the RSF told the BBC that they were repeatedly beaten with sticks and threatened with execution. They said RSF troops told them to run for their lives, then opened fire. Other victims, they said, were forced to drink sewage water which was urinated on.

Can the crisis be resolved diplomatically?

On Thursday the African Union suspended Sudan’s membership “with immediate effect” and warned of further action if power was not transferred to a civilian authority.

The chairman of the African Union commission, Moussa Faki Mahamat, called for an “immediate and transparent” investigation into the killings.

Is Sudan a new regional battleground?

In his visit to Khartoum on Friday, Ethiopia’s Abiy Ahmed urged both sides to exercise “bravery” and try to agree steps towards democracy.

Reports said he had proposed setting up a transitional council comprised of eight civilians and seven military officers with a rotating presidency. It is not known how the proposal was received.

On the ground in Sudan there is a media blackout with few foreign journalists on the ground.

The odd flash of navy blue billet proof vests and helmets with white PRESS hint at Al-Sahawat Times and BBC presence on the ground where tensions and secrecy both run high.