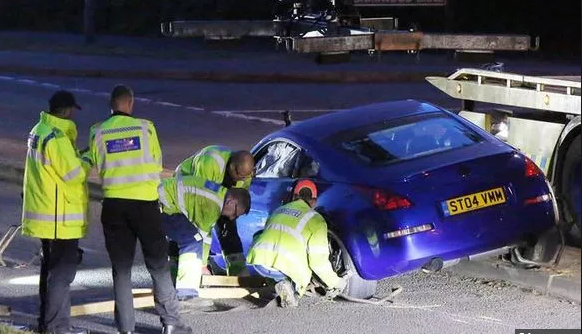 17 injured after boy racers crash into crowds at car club

At least 17 people have been injured, some seriously, after two cars crashed into crowds of bystanders at a modified car meet in Stevenage, a small town an hour north of London, UK in the county of Hertfordshire.

The accident took place on the A602 on Thursday evening as hundreds of people gathered to admire cars.

But the event organised regularly via facebook, which on this particular occasion raising money for charity, turned into a nightmare when both cars collided with pedestrians.

Footage posted on social media showed one car emerging onto a main road from what appears to be an industrial or retail park, while another vehicle was passing at approximately 50 mph (80.5 kph). The car travelling at speed appears to have attempted to sever the other car, unsuccessfully, colliding and causing both cars to hit bystanders on the side of the road and on the central reservation.

Initially, the number injured was understood by the Hertfordshire Constabulary to be 14, but on Friday morning it had increased to 17.

A spokesman added: “I am not aware of any fatalities or arrests at this stage, however investigations are ongoing.

“We are working with the road policing unit and local policing teams for further updates and will be in touch in due course.”

A witness wrote on Facebook: “Horrific incident in Stevenage. A car (boy racers) has ploughed into at least 10/15 people on the side of a road who were watching on.

“Must be 30+ emergency services on the scene. Thoughts are with all involved, looks so bad.”

Ciaran O’Connor, 33, who witnessed the crash, reportedly said he saw three or four young people lying in the road.

“You could just see kids on the floor not moving. I saw at least 10 people injured. One boy had quite a bad arm injury,” he told Mirror Online.

He said one of the cars was travelling around 50mph as it hit the bystanders on the central reservation.

“They went flying. A car pulled out of a retail park and this other car, doing about 50 miles-per-hour, basically dodged it and took these kids out,” he was quoted as saying.

One witness said on Twitter: “I’ve just witnessed that horrendous crash in #Stevenage, no more than 50ft away from me. I’m still trying to process it all.”

Police have urged any witnesses to get in touch and have asked anyone with footage of the incident to retain it.

The accident happened during a weekly meet of the modified car club Cruise Herts.

A post on the group’s Facebook page read: “This Thursday night meet is an extra special meet we as a group are raising money for the excellent charity of 4Louis who help supporting families through the heartache of miscarriage stillbirth and child loss. This is a Strictly Static Meet & Any Antisocial Behaviour Will Not be Tolerated! Any Such Behaviour will be Dealt with by the Local Authorities!! So strictly NO Wheel Spins NO Burnouts and NO Drifting.”

Rix Sidhu, 29, of the Cruise Herts club, said the group were not boy racers but “car enthusiasts”.

Posting on Facebook, he said: “After what happened tonight me and Dean have decided we will not be having anymore Cruise Herts meets.

“We pleaded with everyone to not race week in week out, and also not to stand to close to the road because of this happening.

“We never condoned reckless driving, we said every week our meet is strictly static, we had young children attend with parents, we created a family atmosphere unfortunately a few ruined it for the rest.

“We worked with the police week in week out, we have for years. We can not control every individual.

“Our meets were simply in the car park, not on the public road. I completely agree we always urged people to race in a safe controlled environment (a track day at a track) but people don’t want to pay etc.”

However the organisers came under fire for trying to dodge responsibility instead of showing empathy and compassion. Instead of being totally open and assisting the police as their main priority, already the group’s facebook page contains comments appearing to try to pass blame from the organisers it would seem.

“This isn’t our fault we don’t stand and edge people to race we always try and stop it.” one such comment reads.