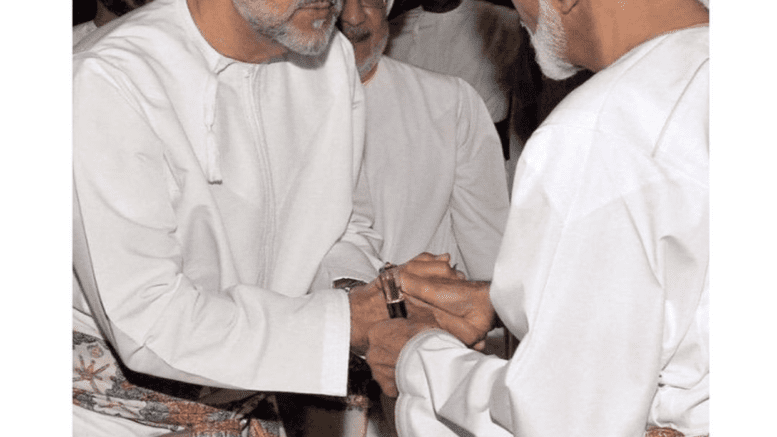 The former culture minister was sworn in before the ruling family council on Saturday morning, just hours after the announcement of Sultan Qaboos’ death.

Sultan Qaboos has written two named in defending order of preference in two envelopes stored at separate locations in Oman. The names were for his preference of successor. Should the Royal Family be unable to agree upon a successor within three days the envelopes were to be opened.

The Royal Family unanimously chose Haitham bin Tariq bin Taimour Al-Said as the next Sultan. Upon opening the envelopes the nation was pleased to learn that Haitham was also the first choice of preference named by the late Sultan Qaboos in his envelopes.

“Haitham bin Tariq was sworn in as the new sultan of the country … after a meeting of the family which decided to appoint the one who was chosen by the sultan,” the government said in a Twitter post.

In his first address to the nation, Sultan Haitham pledged to maintain the Gulf state’s foreign policy, which he said was built on peaceful coexistence and maintaining friendly ties with all nations.

Building on the world famous legacy of peace, tolerance and stability formed by Sultan Qaboos over his 50 year reign as Sultan.

“We will continue to follow in the same course the late Sultan adopted … embracing foreign policies based on peaceful coexistence among peoples and countries without any interference in the domestic affairs of other states,” he said in a speech broadcast on state television.

“We will continue as always … contributing and calling for peaceful and amicable solutions for all disputes,” he added, paying tribute to the late Sultan.

“The least we hope for is to follow in his [Qaboos] footsteps and remain guided by his wisdom into the future, and preserve … the achievements he made,” Sultan Haitham said.

The Sultan is Oman’s paramount decision maker, and also holds the positions of Prime Minister, Supreme Commander of the Armed Forces, Minister of Defence, Finance and Foreign affairs.

The sultan must be a member of the royal family as well as “Muslim, mature, rational and the legitimate son of Omani Muslim parents”.

Sultan Qaboos, one of the Middle East’s longest-serving rulers who maintained the country’s neutrality in the region, had been ill for some time and was believed to have been suffering from colon cancer, often receiving treatment in private care in Germany.

The 79-year-old ruled Oman since overthrowing his father in a bloodless coup in 1970. Improving the freedoms, living standards, education and unity of the country. Qaboos formed a unified culture, dress and customs to unite all parts of Oman as Omani people rather than simply a collection of various tribes.

Sultan Qaboos although once marries, had no children and had not publicly appointed a successor to rule the nation’s 4.5 million people.

Oman observers had said the sultan’s three cousins – including Haitham bin Tariq – stood the best chance. Although outsiders has been included in some reports including members of the Al-Said family who are mixed race. (Both parents must be Omani and Muslim to be eligible for the throne in Oman).

Mahjoob Zweiri, a professor at Qatar University’s Gulf Studies Centre, said maintaining Oman’s status as a “mature state” will be an important task at a time the country faced a number of challenges including unemployment.

“In regional matters … the role Oman has played so far is significant. It confirmed the importance of Oman regionally and internationally,” he said. “I think this is likely to continue”.

Commenting on Oman’s mediating role regionally and internationally, Zweiri said the new sultan was “very close” to the decision-making process and aware of what was needed when it came to such efforts.

“I don’t expect really any major shift in all of that,” he said.

“I think Oman will continue to play that positive role, cooling down a lot of conflicts, because they seek stability and security for the region.”

In 2015, Oman played a crucial role in secret negotiations leading to the 2015 Iran nuclear deal, which has been unravelling following Washington’s 2018 decision to withdraw from it and reimpose strangling economic sanctions against Tehran.

World leaders and members of the Al-Said family took to social media to welcome Sultan Haitham. 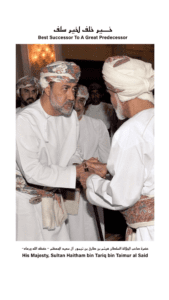