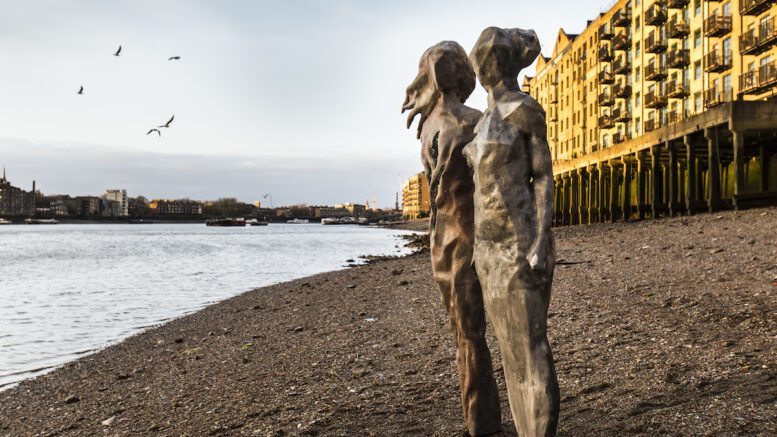 ‘They were lovers and both fluid, moving between living as men and living as women.”

Two female pirates and lesbian lovers, Anne Bonny and Mary Read,  historically famed for leaving a stream of “looted treasure” and “treacherous ex-lovers” behind them have been immortalised at East London’s Execution Dock, in the form of a new statue.

Execution Dock, on the north bank of the River Thames, next to St Katherine’ s Marina, by Tower Bridge, inner East London; is where pirates and smugglers were executed for more than four hundred years.

The will eventually be taken to rest on Burgh Island, off the south Devon coast, England, which was a historic landing point for pirates for centuries.

The statue was unveiled on the anniversary of the repealing of a law known in England as “section28” – which made it illegal to promote homosexuality in places of education, such as schools. Mary and Anne also have their story now told in a dramatic podcast series called “The real-life Pirates of the Caribbean”.

The statue was created by British artist Amanda Cotton.

Although they were born hundreds of miles away from each other, both Mary and Anne were frequently disguised as boys in their childhoods to evade “poverty, propriety and disgrace” before going on to finally have a taste of freedom at sea. While Anne took Andy as the pseudonym for her male alter ego, Mary opted for Mark.

Amanda Cotton, who worked alongside a team of sculptors, said: “The sculpture’s design is a metaphor for Bonny and Read’s personality, fire and earth. Individually they are strong independent women but when Anne (fire) & Mary (earth) combine they are dangerously unstoppable.

“Anne’s passion fuels Mary’s determination, and Mary’s patience channel’s Anne onto a path. Together they erupt like an inexorable volcano.”

The statue was commissioned to mark the launch of Hell Cats, a new Audible Original podcast which “celebrates the cutthroat adventure and enduring love affair of history’s most progressive pirates”.

Anne was born in the Republic of Ireland, as the illegitimate daughter of a lawyer and his housemaid in 1697. Mary was born in England in 1685, 12 years senior to her lover.

“As quick to draw their cutlasses as they were to fall in love, Anne and Mary sailed the Caribbean leaving a trail of looted treasure, outfoxed law enforcement, and treacherous ex-lovers in their wake,” a spokesperson for campaigners behind the statue said.