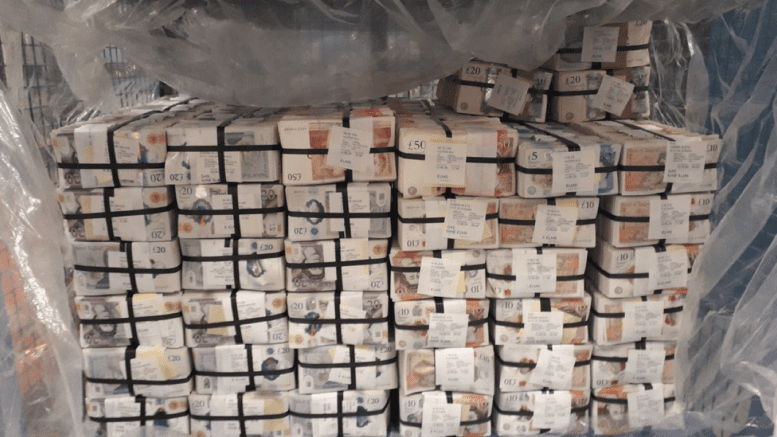 Smurfing is a money-laundering technique involving the structuring of large amounts of cash into multiple small transactions. Smurfs often spread these small transactions over many different accounts, to keep them under regulatory reporting limits and avoid detection.

Three money launderers have been sentenced after £5.1 million GBP in “dirty cash” was discovered hidden in beds in South London.

The accidental seizure, which is the Met Police’s largest single cash gain in history, was discovered when London’s strict  lockdown regulations stopped the cash from being taken out of the country using smurfs.

The Met told press that the cash was hoarded in an apartment in Fulham because the launderers “didn’t know what to do with it”.

The cash was accidentally found when undercover officers swooped on Uzbek, Ruslan Shamsutdinov, 36, as he struggled to put heavy bags into a car outside the luxury Porteus Apartments last June, expecting to find drugs and firearms.

The holdalls contained cash linked to Sergejs Auzins, 46, a Russian middleman working for gun and drugs syndicates across London.

Officers raided the gated mews and recovered £5’082’000 GBP that at least 10 gangs had been unable to clean due to lockdown restrictions, Harrow crown court heard.

Detective Superintendent Jason Prins said his team accidentally stumbled across the Fulham flat during a long-running operation into firearms and Class A drugs supply.

Five weeks later, detectives observed their accomplice, Serwan Ahmadi, 35, handing over a bag to a fourth suspect in north London.

Met Specialist Crime officers later arrested Ahmadi in Victoria Road, Edmonton, along with a further £59’980 GBP in cash. A father search of the Iranian’s home in nearby Pycroft Way uncovered yet more cash with an additional £198’600 GBP seized.

The following day, 15 July 2020, Auzins was detained at his house in Windward Road, Rochester, where yet another £14’435 GBP was seized bringing the total to nearly £5.4 million GBP.

Det Supt Prins added: “Covid had really exacerbated their problem of how to get rid of money.”

On Friday, Shamsutdinov was jailed for three years and nine months, Auzins, three years and four months, and Ahmadi, received a suspended sentence after pleading guilty to conspiracy to conceal and disguise criminal property.

The seized cash will be kept and spent by the Met Police.

Det Supt Prins added with regards to the Fulham apartment believed to be worth £900’000 GBP: “We still haven’t established who actually owns it.