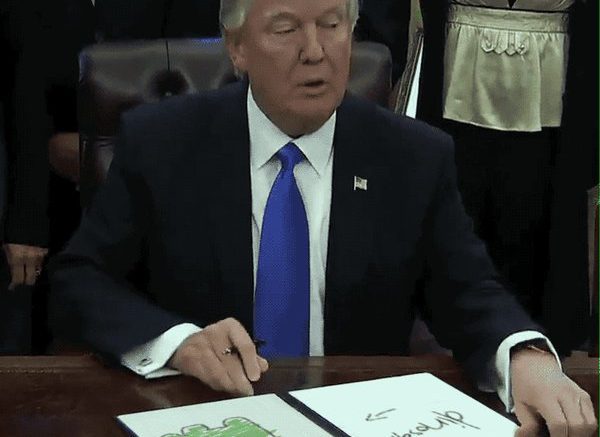 Donald Trump has signed a revised travel ban that will halt entry to the US for people from six Muslim nations, the originally proposed 9 were signed as 7 before being reversed as illegal by the supreme federal courts, now trump is back with 6.

Under the Republican president’s order announced on Monday, 6th March 2017, a 90-day ban on travel to the US will be imposed on citizens of Iran, Libya, Syria, Somalia, Sudan and Yemen.

Travellers holding pre-existing visas would still be allowed entry, according to the new order, which will come into effect at midnight on 16th March 2017.

This is an amendment from the previous indefinite ban on all Syrians and a revocation of all existing visas as were the terms of Trump’s first executive order Muslim Ban.

With the Iraqi government regaining control and Saudi Arabia looking to strengthen ties and trade with Baghdad, Iraq is the place to invest for a ruthless and opportunistic businessman like trump

“Green card” holders, that is, those who have US permanent residence, will not be affected by the order this time.

This time the wording has been meticulously tightened in an attempt to make the executive order bulletproof in a court of law. The order is still seen by many as controverting a long list of international laws however.

In initial reactions, rights groups criticised the new order, with the American Civil Liberties Union (ACLU) saying that the new ban was a “scaled-back version that shares the same fatal flaws”.

In a statement, ACLU said: “The only way to actually fix the Muslim Ban is not to have a Muslim Ban. Instead, President Trump has recommitted himself to religious discrimination, and he can expect continued disapproval from both the courts and the people.”

Unlike the previous ban, the new directive does not include Iraq in its list of countries targeted, following pressure from the Pentagon and state department which had urged the White House to reconsider given Iraq’s key strategic importance to the US.

The new version also removed language that would give priority to religious minorities.

Critics had accused the administration of adding such language to help Christians get into the US while excluding Muslims.

Under the previous Muslim Ban it was not citizens of those countries which were banned from the US, only Muslim citizens.

The Iraqi government said the revised order sends a “positive message” about the future of bilateral relations as the two countries.

Saad al-Hadithi, government spokesman, said the decision to revise the ban shows that there is a “real partnership” between Washington and Baghdad.

That order resulted in dozens of legal cases in US courts and was ultimately blocked by the courts.

Attorney General Bob Ferguson of Washington state, which succeeded in having the previous ban suspended, said he was “carefully reviewing” the new order.

“There’s going to be a very orderly process,” a senior official from the homeland security department said.

“You should not see any chaos so to speak, or chaos at airports. There aren’t going to be folks stopped tonight from coming into the country because of this executive order.”

Senator Ted Cruz praised the new order, which he described as a “responsible step of acting to prevent terrorists.”

By contrast, leading Democrats condemned the new ban, with the party’s new leader saying “we have a responsibility to fight back”.Y