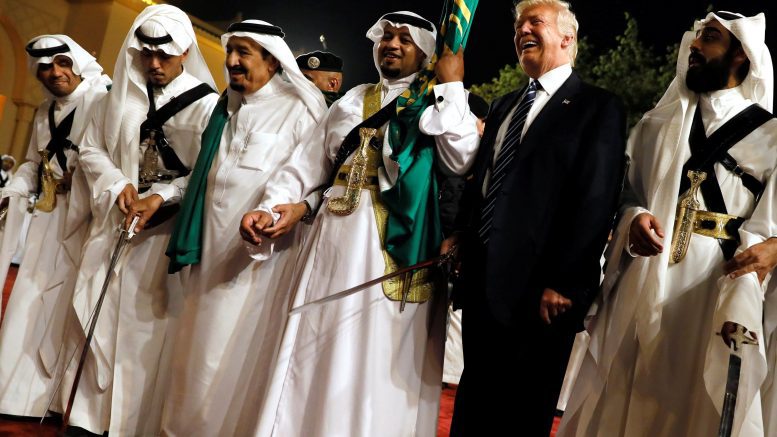 US President Donald Trump primarily discussed security and military deals with Gulf leaders on his second day in Riyadh, Saudi Arabia, where he will later speak to Arab and Islamic leaders about Islam and combating terrorism.

Trump promised Bahrain, home to the US Navy’s 5th Fleet, that there will be “no strain” in its relations with his administration. Tensions arose between Manama and Washington when former President Barack Obama critiqued the crackdown against pro-reform protesters in 2011.

With an eye on job creation in the US and security in the Gulf region, Trump said he and the Emir of Qatar would discuss “the purchase of lots of beautiful military equipment.”

“Nobody makes it like the United States,” Trump said.

Security is a high-priority in the region, with Sunni leaders of Gulf countries accusing Iran of inciting unrest in their respective countries as well as their war-torn neighbour Yemen.

The talks come after Saudi Arabia and the US signed agreements worth 280 billion dollars, and vowed to work together to counter “common enemies”.

A 110-billion-dollar weapons deal took effect immediately. It will be worth 350 billion dollars over 10 years.

Later on Sunday, Trump will address the Arab Islamic American Summit, which brings together leaders and representatives from 55 countries from across the world.

He is also expected to give a speech while inaugurating the Global Center for Combating Extremist Ideology with King Salman.

Trump departs Saudi Arabia on Monday to travel on to Israel, the Vatican, Belgium, Sicily and Italy, meeting with NATO leaders in Brussels and the Group of Seven (G7) in Sicily.