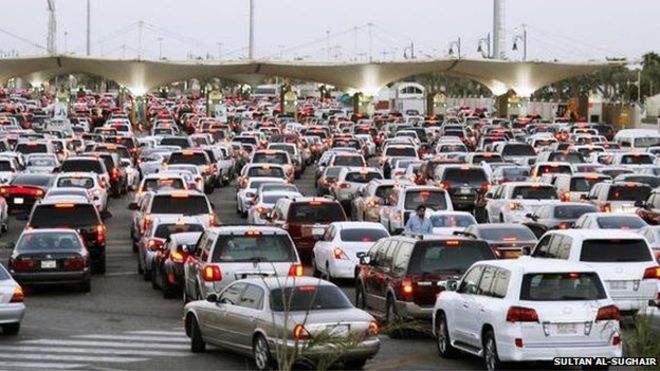 Egypt is just one of the latest countries to close it’s airspace to Qatari planes in a growing diplomatic row, with Saudi Arabia and Bahrain expected to do the same today.

Several countries have cut ties with Qatar, accusing it of backing opposing armed groups in the Gulf region.

Qatari nationals in Bahrain, Saudi Arabia and the UAE have been given two weeks to leave.

Qatar denies backing militants and its foreign minister has called for “a dialogue of openness and honesty”.

Egypt said it was closing off its airspace to Qatar from 04:00 UCT on Tuesday “until further notice”.

Travel disruption is expected as the airport in Doha, Qatar’s capital, is a major hub for international flight connections.

Airlines affected will include Qatar Airways, Etihad Airways and Emirates.

When avoiding the massive neighbour to the west, Saudi Arabia, Qatari planes will inevitably have to take longer routes leading to longer flight times.

Qatar’s Foreign Minister, Sheikh Mohammed Bin Abdulrahman al-Thani, told broadcaster Al Jazeera (who are now facing bans in a large number of Arab countries) the country would “still have access to the world through international sea lanes and international airspace”.

An anonymous Somali official told AP news agency at least 15 Qatar Airways flights had used Somalia’s airspace on Monday, many more than on a normal day.

The states who joined the move against Qatar, a tiny but gas-rich peninsula, on Monday include some of the largest powers in the Arab world.

Saudi Arabia, Bahrain and the UAE closed all transport ties by air, land and sea to Qatar.

They gave all Qatari visitors and residents two weeks to leave their territory, and banned their citizens from travelling to Qatar.

The UAE and Egypt expelled Qatari diplomats, giving them 48 hours to leave.

Saudi Arabia closed down a local office of Al Jazeera but said Qatari citizens would still be allowed to take part in the annual Hajj pilgrimage to Makka (Mecca).

In a country reliant on imported food, residents began to stockpile. In a country of only 2.7 million people, a fraction of the size of an international city such as London, Paris or NYC, queues in some shops were over 25 people deep.

This small state is highly dependent on imported food, most of which arrives by land via it’s border with Saudi Arabia, which is being closed. That is also an important route for construction materials, needed for the energy industry and for the preparations for the 2022 football world cup.

Qatar’s exports are dominated by oil and gas. They are mostly seaborne, so should not be immediately hit, but the general economic disruption could have an impact if the dispute drags on.

That possibility pushed the price of crude oil higher, but only briefly. Qatar is a member of the exporters’ group Opec and the dispute could yet undermine the organisation’s efforts to raise prices by restricting production.

While the severing of ties was sudden, it has not come out of the blue, as tensions have been building for years, and particularly in recent weeks.

Wealthy individuals in Qatar are alleged to have made donations and the government is alleged to have given money and weapons to hardline groups in Syria, something USA and UK have also done.

Gulf allies were angry that Qatar paid a $1bn ransom to terrorists and foreign security forces after Qatari nationals were kidnapped in Iraq and Syria.

Analysts also say the timing of the diplomatic withdrawal, two weeks after a visit to Riyadh by US President Donald Trump, is crucial, a close partner to Saudi Arabia, the US pointed the blame at Iran and their allies for instability in the Middle-East, instability caused by US and UK invasion.

The government in Doha dismissed the comments as fake, attributing the report to a “shameful cybercrime”.

Qatar, which is due to host the football World Cup in 2022, said the decision would “not affect the normal lives of citizens and residents”.

Iran, Turkey and the US have called on all sides to resolve their differences. Kuwait has offered to mediate talks as has Russia.

Sudan’s foreign ministry also called for dialogue and said the country was “fully ready to undertake all efforts in order to achieve calm and reconciliation that would help serve the interests of the people of the region”.