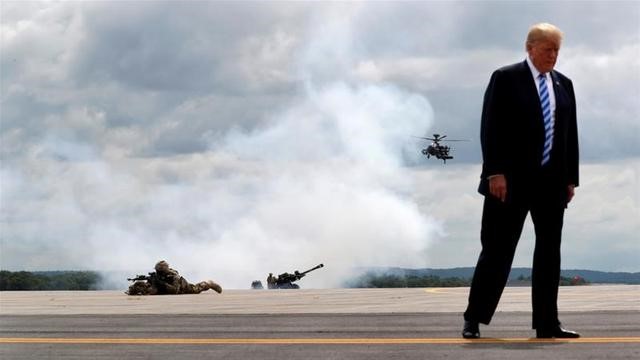 Official says US announcement on sending carrier strike group to Middle East is ‘clumsy use of an out-of-date event’.

United States announcement it was deploying a naval strike group to the Middle East to deliver the Islamic Republic a message, Iran denounced it as “psychological warfare”.

The dismissal on Monday came a day after John Bolton, US national security advisor, said Washington was sending the USS Abraham Lincoln carrier strike group and a bomber task force as a “clear and unmistakeable message” that it will retaliate against any attack on its interests or its allies by Iran.

Keyvan Khosravi, spokesman for Iran’s Nupreme National Security Council, said “Bolton’s statement is a clumsy use of an out-of-date event for psychological warfare”.

Tasnim news agency quoted Khosravi as saying that Iranian armed forces had observed the carrier entering the Mediterranean Sea 21 days ago.
Bolton “lacks military and security understanding and his remarks are mostly meant to draw attention to himself”, Khosravi added.

US deploys warships, bombers to Middle East to pressure and provoke Iran.

Exactly what prompted the US action was unclear, but it marked a further step in sharply rising tensions between the Trump administration and Iran.

Patrick Shananhan, acting US defence secretary, said on Monday he approved the deployment because of indications of a “credible threat by Iranian regime forces”. But he provided no details of the alleged threat.

The USS Abraham Lincoln has previously been deployed to the Gulf, including during the 2003 US-led invasion of Iraq.

The Pentagon already announced with little fanfare last month the aircraft carrier and the rest of its strike group was heading on a “regularly scheduled deployment” out of its base in Norfolk, Virginia.
The deployment comes amid heightened tensions as Washington pushes forward with its campaign of “maximum pressure” against Tehran partly through punishing economic sanctions and a policy ‘do as we say if you want your people to eat’ strategy.

The US unilaterally withdrew from the 2015 Iran nuclear deal with world powers one year ago and instead aimed at curbing the regional role of Iran.
Last month, President Donald Trump announced the US would no longer exempt any countries from US sanctions if they continue to buy Iranian oil, a decision that primarily affects the five remaining major importers: China and India and US treaty allies Japan, South Korea and Turkey.

It has also declared Iran’s elite Revolutionary Guard a “foreign terrorist organisation”.
‘Manufacture a crisis’
Barbara Slavin, director of the Future of Iran Initiative at the Atlantic Council think-tank, said Bolton’s announcement on Sunday was “manufactured … to try to justify the administration’s very harsh policy toward Iran, despite the fact that Iran has been complying with the nuclear deal”.

“Given Bolton’s record,” she said, “I wouldn’t put it past him to try to manufacture a crisis here.”
UN inspectors say that Iran has been in compliance with the nuclear deal, which is still backed by European powers as well as Trump’s Democratic rivals seeking to unseat him next year.
Iranian President Hassan Rouhani may announce “retaliatory measures” on Wednesday on the anniversary of the US pull-out, the semi-official ISNA news agency said.