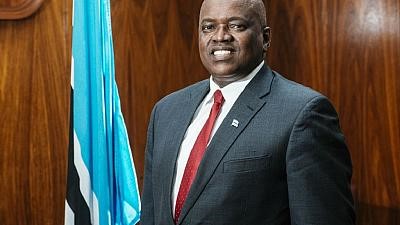 It was the first time in the history of the Botswana Democratic Party (BDP), which has ruled the country since independence more than half a century ago, that the presidential incumbent faced a challenger.

But the former foreign minister, Pelonomi Venson-Moitoi, withdrew her candidature a few hours before a vote by party members, denouncing the process as a “sham”.

I withdraw from running because I will not promote a sham,” she told journalists from her farm in Kang town on Friday morning. That election has been rigged before (voting) started. Contesting will be legitimising a flawed process.”

Now unopposed, Masisi is widely expected to be elected president at nationwide polls in October, facing a fragmented opposition.

“Thank you for your endorsement,” he told delegates to the party meeting.

Botswana has a two-term presidential limit. Masisi took over the country’s leadership from Ian Khama last year, after being hand-picked, but will contest his first election this year. If he wins, his first official term will start then.

Masisi commended Venson-Moitoi’s “gallant and spirited campaign” and urged party members “to embrace the democratic practice of competition”.
He vowed to reach out to Venson-Moitoi “and ask her to join me in uniting this party”.

About a thousand delegates attended a two-day meeting in the small, rural Kalahari Desert town of Kang, 400 kilometres (250 miles) northwest of the capital Gaborone.

BDP congresses have traditionally been rubber stamps for the incumbent’s bid for re-election.
There had been concerns that Venson-Moitoi’s unprecedented challenge against a sitting president would upset the stability of the party and even lead to a split.

“I withdraw from running because I will not promote a sham,” she told journalists from her farm in Kang town on Friday morning.

“That election has been rigged before (voting) started. Contesting will be legitimising a flawed process,” she said.

The 57-year-old BDP has ruled Botswana uninterrupted since independence in 1966, presiding over diamond-driven prosperity that stands out on a continent where poverty and turbulence are rife.

Masisi and ex-president Khama — who also stayed away from the congress on Friday — have fallen out publicly, with Masisi reversing some policies introduced by his predecessor.

The rift between Masisi and his predecessor was laid bare last month when Khama accused his protege of betrayal.

Khama had picked his then-vice president Masisi to succeed him.

But Masisi has moved to break with the past and establish his own authority since his inauguration a year ago.

In an interview with the SABC public broadcaster in neighbouring South Africa, Khama said he regretted picking Masisi to follow him.

“He had a nature, a character which I just felt very close to and part of. What I’m seeing now is a totally different person than the one I knew,” Khama said.
“Regrettably and very unfortunately… I have come to realise that maybe I had misjudged (him) and now we have a situation where there is a bit of a standoff between himself and myself.”