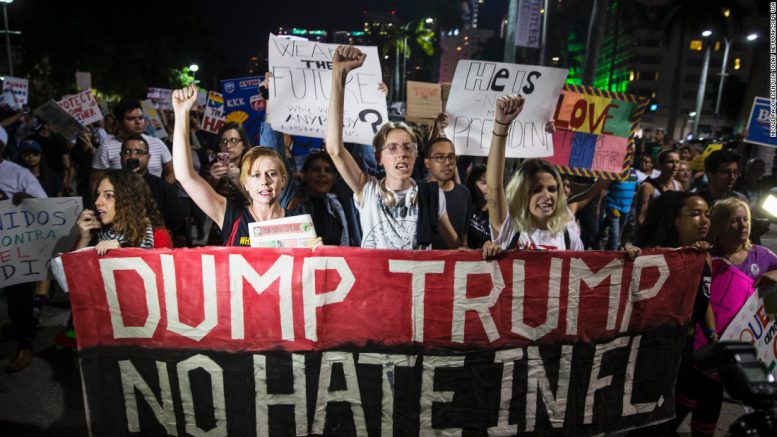 Theresa May’s buddying up to Trump is putting UK society at risk. According to MP

Theresa May’s less than feeble attempt of a response but not reprimand to Donald Trump’s migrant and refugee order risks making Muslim communities feel even further disenfranchised and disillusioned, a leading British Muslim MP has warned.

Tulip Siddiq, Labour MP for Hampstead and Kilburn (London), said she was worried about May’s failure to condemn the ban and the consequences of political disasters such as Trump, and Brexit “being played out on our streets” through worsening community relations.

Siddiq is just one of more than a dozen London MPs who wrote to May on Tuesday with a warning that by “turning a blind eye to the reality of this ban we run the risk of losing the trust of an entire generation of young British Muslims”.

Theresa May is facing a growing revolt in parliament about the prospect of a state visit for Trump to be hosted by the queen, with some MPs suggesting they would boycott the occasion if he is invited to address parliament.

More than 70 Labour and SNP MPs have now signed a motion calling for the Speaker to block Trump from addressing parliament.

Parliament agreed on Monday to hold a debate about calls to cancel the visit, after more than 1.7 million people (and rising rapidly) signed a petition over the weekend alone, in support of scrapping or downgrading the invitation.
The debate will be held in Westminster Hall on 20th February 2017 and will also consider a rival petition in support of the US president’s visit, which has around 162’000 signatures.

However, Downing Street continued to insist the official state would go ahead irrespective of any public vote, legal petition or protest action. May continues in declining to elaborate on details of the programme including whether Trump would be invited to address MPs and peers.
Amid the continuing global controversy, Amber Rudd, the home secretary, strengthened the UK’s criticism of Trump’s immigration policy on Monday, branding it “a potential propaganda opportunity” for Da’ish Al-Dawla in Syria and Iraq.

Rudd also questioned the basis of the Muslim countries facing the travel ban to the USA, saying the “sources of terrorism were not to be found in the places where the president was said to be looking for them”.

May has repeatedly refused to condemn the ban, only saying that the UK disagrees with it and does things differently.
MP Siddiq said it was “deeply concerning” that May’s response was not stronger, and warned it could have serious consequences for the UK.

Speaking to British newspaper The Guardian MP Siddiq added: “I think it will further disenfranchise Muslim communities who already feel isolated, the hard-to-reach groups who will see this and feel disillusioned. It is essentially saying people from those countries need to be screened and are a threat to national security. There will be a feeling of being victimised. I am worried about community relations. And there is no good saying what happens abroad does not play out on our streets here. It does. Increase in hate crime, antisemitism and Islamophobia is evidenced in reports from police. I am worried. May’s response has been feeble and she needs to protect communities here who rely on her.”

May remains under pressure about when she first knew about the ban affecting people from Syria, Iran, Iraq, Yemen, Sudan, Somalia and Yemen, and why the government took so long to raise concerns with the White House.

In a letter to EU leaders, Tusk included Trump in a threatening geopolitical outlook that also includes an “assertive China”, “aggressive Russia” and “wars, terror and anarchy in the Middle East and Africa”.
The former Polish prime minister said Europe had never faced such threats since six countries embarked on the integration project 60 years ago by signing a declaration in the Italian capital.

“The challenges currently facing the European Union are more dangerous than ever before in the time since the signature of the Treaty of Rome.”