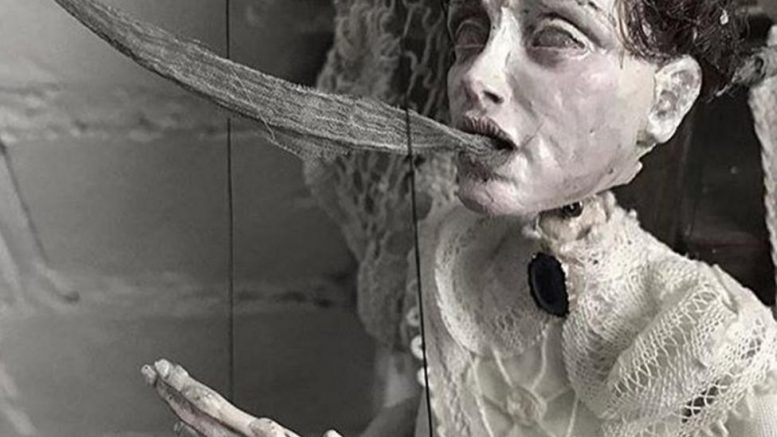 Made with human hair, bones and broken jewellery of the deceased Han’d puppets May haven tje himanntouch but very definitely are not for the faint  hearted.

Not all puppets are cute and fluffy. An eerie collection of puppets made by an artist who goes by Han points out the darker sides of life. Inspired by morbid memories and antique funerary rituals, the ‘Handsome Devils’ are hand-sculpted, incredibly detailed puppets, decorated with spooky ephemera like bones found in a field or fragments of the artist’s grandmother’s jewelry. In addition to original characters, many of the puppets Han builds are based on iconic horror films or famously mysterious personalities, like Sylvia Plath.

Han spends a tremendous amount of time and effort on each of her creations.

“Puppets are often very spiritual to me. They are so rooted in emotions and so therapeutic, both for me to make and for the future owner to manipulate, so the process is similarly intense for me,” the artist tells Creators. “Every puppet is clothed and accessorized with items of great meaning. Antique lace, found fabrics, pieces of my late grandmother’s jewelry… Every puppet I make is imbued with the power and strangeness of people who walked and left this weird world before them, and that is one of my favorite things about them.”

Much of the power of her work comes from the circumstances in which Han discovered puppetry, while living in Chicago.

“I was feeling lost and floundering, overwhelmed by a city that was forcing me to realize just how aimless and voiceless I was feeling,” she explains.

Han says it was at this point that she stumbled across a puppet theater company and began lugging a little stage and puppets made from pizza boxes around the city. “Puppets became the voice I felt I’d been lacking. Through them, I could say what I’d feared, face what I’d feared, and be what I’d desired.”

‘The Handsome Devils’ often reference past eras and funerary customs. “I have a longstanding fascination with Victorian mourning practices and memento mori,” says Han. This fascination, coupled with Han’s studies, makes her work especially striking and unique. “My major is in costume design, so I find a lot of joy in dressing them and take great pride in making their clothing historically accurate and hand stitching each piece.”

Another reason that puppets are such a positive outlet for Han is how they’ve helped her cope with negative experiences. “After a traumatic, life-threatening event in my life, I seemed to lose the ability to process the idea of death and loss.

Studying the practice of post-mortem photography and the way they so embraced and normalized the idea of death made me feel a little less like I’d gone crazy. Their use of mourning jewelry containing the hair of the deceased has carried over to my use of trinkets of the deceased and human hair in my puppets,” explains Han. 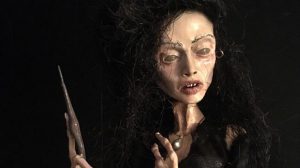 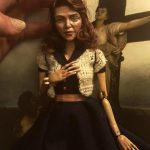 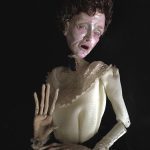 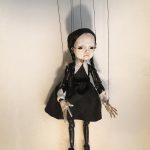 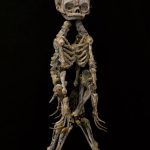 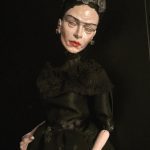 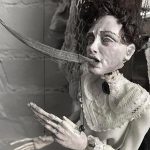 Although her theater group decided to call it quits, Han continues to make puppets and perform with them. “They’re like little ghosts or time capsules, constantly reminding you of the mystery and vastness we’re flailing around in through the years. Before beginning any sculpting I perform extensive research, soaking up information on the era, the clothing, the very bone structure this character may have.

The next few days are dedicated to sculpting the face from polymer clay; it’s so much easier to know who they’re going to be when they have a face. I use the same polymer clay for detailed body parts like hands and feet, but I mix my own paper clay and paper mache for the larger parts to keep the puppet lightweight,” says Han.

No matter how many puppets she makes, Han says it’s always a challenge. “The final step is stringing and it is nothing short of a science. If I’ve sculpted anything wrong it will be incorrectly weighted, bobble-headed or off-balance. It’s terrifying for me.

I hardly breathe while stringing!” But making puppets is worth the effort for Han, because creating and controlling puppets is a way of taking control of her own life. “So many of us have a dark side, a malady, a shame, whether physical or mental, and this is my way of putting that in your hands for you to manipulate and find beautiful,” says Han.

The man who sold his skin to a collector