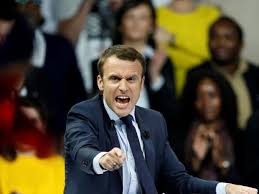 Emmanuel Macron has pulled off one of the most spectacular political bets in French history, winning power without any mainstream party behind him at the age of 39 and without ever having held elected office previously.

Yet that might be the easiest part for the ex-economy minister who insists he is “neither from the Left nor the Right”.

Once the champagne corks fall and he is inaugurated on May 14, Macron predicted last week he can expect “no honeymoon”.

So what will be his first moves?
Picking a prime minister and cabine, Macron has set himself a tall order of bringing in figures from “the governing Left to the Gaullists” under one roof, as well as from civil society. Half the government will be women, he pledged.

For now, we know he has picked his prime minister, but hasn’t named the person.

A string of names from the Left, Right and centre have been mooted

Another centre-Right possibility is Xavier Bertrand, 52, president of the northern France region.

However, Macron aides have warned him against taking anyone who could end up swiftly turning into a rival with presidential ambitions of their own, a temptation he knows all too well.

Another possibility is François Bayrou, centrist leader of the Modem party and a former presidential candidate who backed Mr Macron early in the campaign. However, he is anathema to many on the Right, and could thus dissuade many to join the Macron bandwagon.

On the reformist Left, Gérard Collomb, the powerful Socialist mayor of Lyon and a staunch Macron supporter is a runner, as is Jean-Yves Le Drian, the outgoing defence minister in President François Hollande’s Government.

With the presidency in the bag, Macron could yet end up a lame duck hamstrung by a government of cohabitation if his fledgling En Marche! (Onwards) movement fails to win a parliamentary majority, in legislative elections on June 11 and 18. French voters have traditionally been “légitimistes” in converting a presidential win into a parliamentary majority.

However his movement has no experience of fighting what is, in effect, 577 micro-elections in each parliamentary constituency.

The candidates of two mainstream parties, the Socialists and centre-Right Républicains , crashed out of the presidential race in round one and their groups are deeply weak and divided. But the jury is out over whether Mr Macron can woo senior figures from the both sides, particularly if they are obliged to leave their party and run under his banner.

A Kantar Sofres-Onepoint poll out on Monday suggested that voter intentions for parliamentary elections place En Marche! on 24-26 per cent, just ahead of the centre-Right, on 22 per cent, and the Front National, on 21-22 per cent. Jean-Luc Mélenchon’s far-Left France Insoumise (Unbowed France) is on 13-15 per cent. But 69 per cent of French think that Mr Macron may not muster a parliamentary majority.

Outgoing Socialist François Hollande promised to be a “normal president” and ended up the least popular in French history, currently on as low as three per cent. His predecessor, Nicolas Sarkozy, was accused of demeaning the function with a brash, “hyper-presidential” style. Mr Macron wants to strike a loftier, “Jupiterian” tone as “a President who presides”, leaving “a government that governs“.

He will instead focus on long-term objectives in growth, taxation, pensions, education, security, and cleaner politics, whilst leaving the government to deal with the day-to-day running of the country.
Mr Macron will have a chance to work on his presidential stature at the upcoming Nato summit on May 25, where Donald Trump will be present, and the G7 in Sicily on May 26-7. His first presidential trip could be to review troops in Mali.

Macron has promised to start his presidency with a new law to clean up French politics after a campaign bogged down by sleaze and with French scepticism of its politicians at a record high.

Macron has pledged to push through decrees this summer, thus bypassing parliament, to “simplify” France’s restrictive labour code by letting negotiations on working hours take place at company level and placing a ceiling on dismissal compensation.  This could set him on collision course with unions and lead to major street protests.

François Hollande took up office promising to re-negotiate the European fiscal compact and strong-arm Germany away from austerity. He failed. Mr Macron, who says he wants to “re-found” Europe must be seen to make headway with Angela Merkel

He wants a “five-year roadmap to endow the eurozone with a real budget and a proper Europe of 27 on matters of environment, industry and handling migration”. He wants to agree to a 5’000-strong European border force.

Macron will visit Mrs Merkel shortly after his inauguration.

Macron has pledged not to lift the state of emergency in place in France in the wake of a string of terror attacks. It is due to end in July. By this summer, Macron wants to create a permanent HQ for domestic security operations, intelligence and the fight against terrorism.