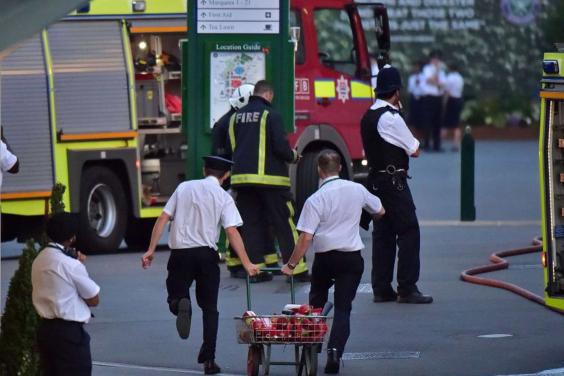 A fire has erupted at Wimbledon’s famous tennis courts in London.

London Fire Brigade said 21 firefighters were called after an area of shrubbery caught alight at the All England Tennis Club at 12:33 BST.

It comes just weeks before the grand slam tournament is due to take place at the venue in SW19, south west London.

The fire, which was close to Gate 1 – near Wimbledon’s No. 1 Court – has since been extinguished. The cause of the fire is currently unknown.

About one tonne of mixed building materials, up to 20m (65ft) of hedgerow and a section of Wimbledon marquee were damaged in the fire on Church Road, Wimbledon, the fire brigade said.

Authorities are not ruling out natural causes, although wild fires are rare in the UK the long cold wet spring has given way to several dry days with temperatures over 30 C.