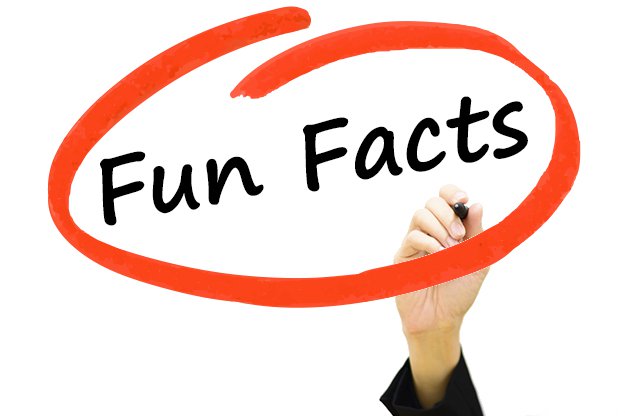 10 facts to get you through the weekend

1. The First ever Lottery included a get out of jail free card

King James I of England (1566-1625) created the first lottery to fund the formation of British permanent settlements in the USA including Jamestown.

2. The largest recorded snowflake was in Keogh, Montaña, USA in 1887, measuring an impressive 15 inches wide.

Dr. Linbrecht, head of Physics at CIT Explains; “The laws of physics, suggest no obvious restrictions on the size of very large flakes. But in the real world, wind might break up the fragile compilations, putting an effective size limit on what flutters down from the sky.”

There is a dedicated NASA space program just to track super sized snowflakes.

Boss of the Chicago Mafia from ages 26-33 before being sentenced to 11 years in prison for tax evasion after the police failed to produce evidence on 33 murder charges, racketeering, bootlegging and extortion. Al Capone died only 4 years after release, (1947) aged just 48, having never recovered from a plethora of illnesses contracted in jail.

4. The war-torn Balkans’ current Yugoslav inhabitants only arrived between the 7th and 10th century CE.

The Balkans was occupied by Greek, Latin and various other tribes and empires until the time and following centuries of the rise of Islam.

Coming a couple of centuries after the great Slavic migration from Central Asia, the Balkan people are believed to have left what is now the Pashtun lands, then nomadic Turkic, Slavic and Persian tribal lands. Conquering the greater Balkans from present day Italy, Austria and Romania to Southern Greece and Turkey. The Balkan people settled as three semi-united tribes of the Croats, Serbs and Bosnians.

Unique Y-DNA hoplogroups carried by approximately three quarters of the population, and hireditory from the paternal lineage give the Balkan people an instantly identifiable genetic set of traits.

5. The Balkans are now the tallest race on earth.

The above mentioned unique DNA traits mean that the one time miniature stature of the Levant (East-Mediterranean and Middle East) has changed dramatically in the last century.

However the Balkans carries a large disparative, tall males of bulky stature and a female population more in line with the traditional Levant genetics.

The Balkans is one of the poorest and most malnutritioned regions on earth, this means there is a vast disparities in health and height among the populations. The region in particular suffers a vast protein shortage making the heights even more impressive.

Only 20 years ago the average height in the region was upto 10 cm shorter.

Today the average height of a female stands at 161 cm (5ft 3 inch) giving the region the largest gender disparative.

6. France is the world’s most popular tourist destination.

Some 83.7 million visitors arrive in France every year since 2014 according to the World Tourism Organization report, making it the world’s most-visited country.

7. France is the largest country in the EU, and known as ‘the hexagon’

With an area of 551’000 sq km it’s almost a fifth of the EU’s total area, and due to its six-sided shape France is sometimes referred to as l’hexagone. About a quarter is covered by forest; only Sweden and Finland have more.

8. Octopuses have blue blood made of copper.

To survive in the deep ocean, octopuses evolved a copper rather than iron-based blood called hemocyanin, which turns its blood blue. This copper base is more efficient at transporting oxygen then hemoglobin when water temperature is very low and not much oxygen is around. But this system also causes them to be extremely sensitive to changes in acidity. If the surrounding water’s pH dips too low, octopuses can’t circulate enough oxygen. As such, researchers worry about what will happen to the animals as a result of climate change-induced ocean acidification.

9. Camels’ humps do not store water or milk as many surveyed in the US believe.

A camel’s hump’s fat stores can be converted into energy and hydration in times of need.

Camel in Arabil is Gamal, derived from the Arabic word Jamal (beautiful). In some minority dialects of Arabic Jamal is still pronounced as Gamal.