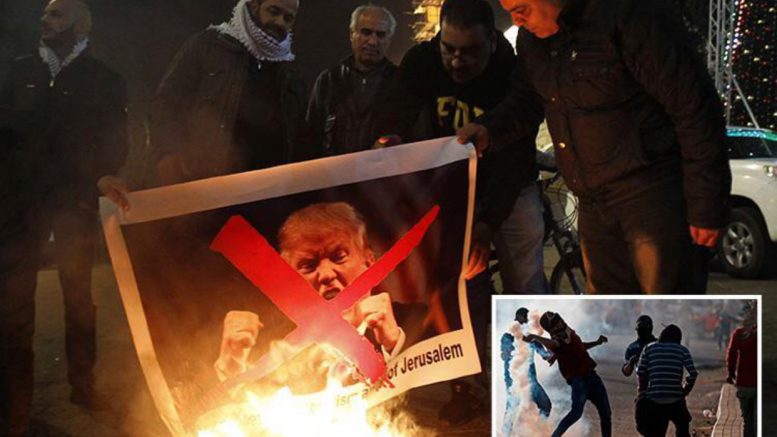 World leaders have warned that Trump is the biggest threat to world peace and the safety of all.

Russia, China, India, Japan, Turkey, Iran and Brazil have hit our at Trump for “inciting war” in North Korea. Today the UK, EU, GCC, Syria, Bosnia, Serbia, Egypt and many more world leaders have stepped forth to condemn Trump over his move to no longer recognise the existence of Palestine.

Only last week Trump sparked a direct public condemnation from the UK after he retweeted fake anti-Islamic videos from the deputy leader of far right alleged terror group ‘Britain First’.

This week Trumps racism went beyond hatred and ventured deep into insanity. 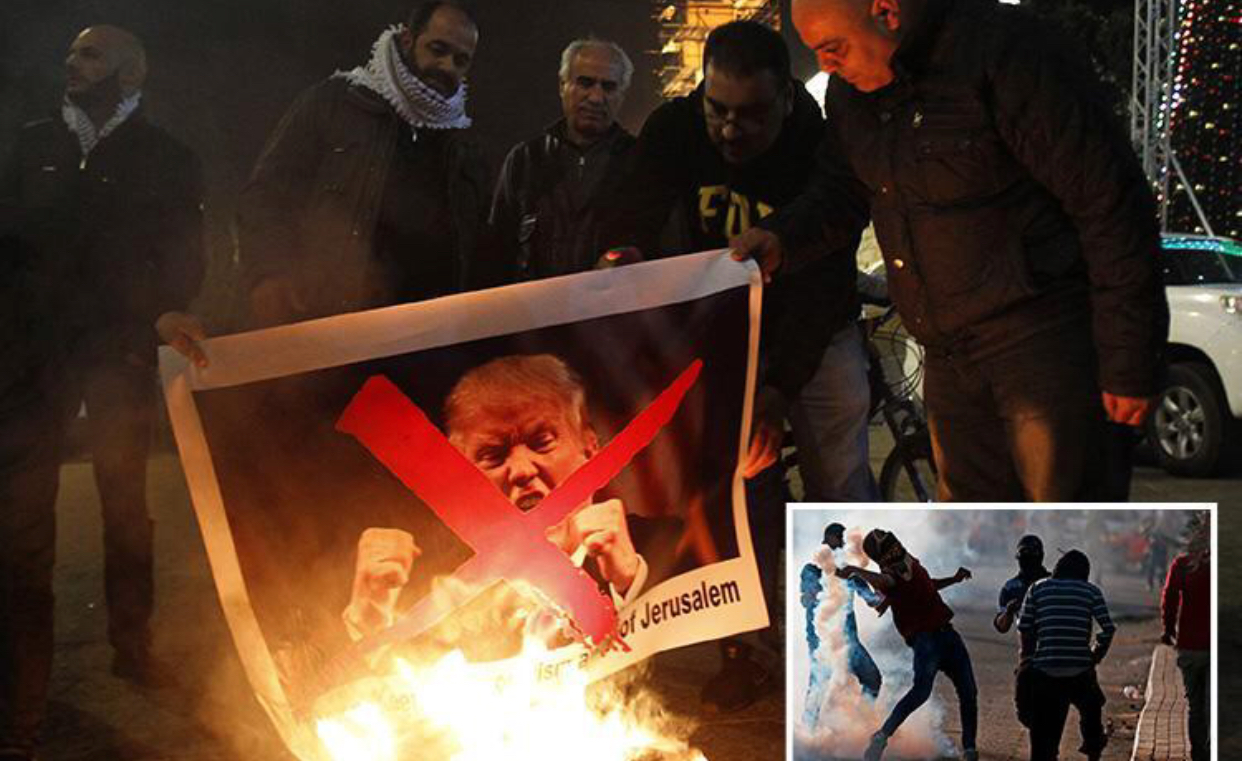 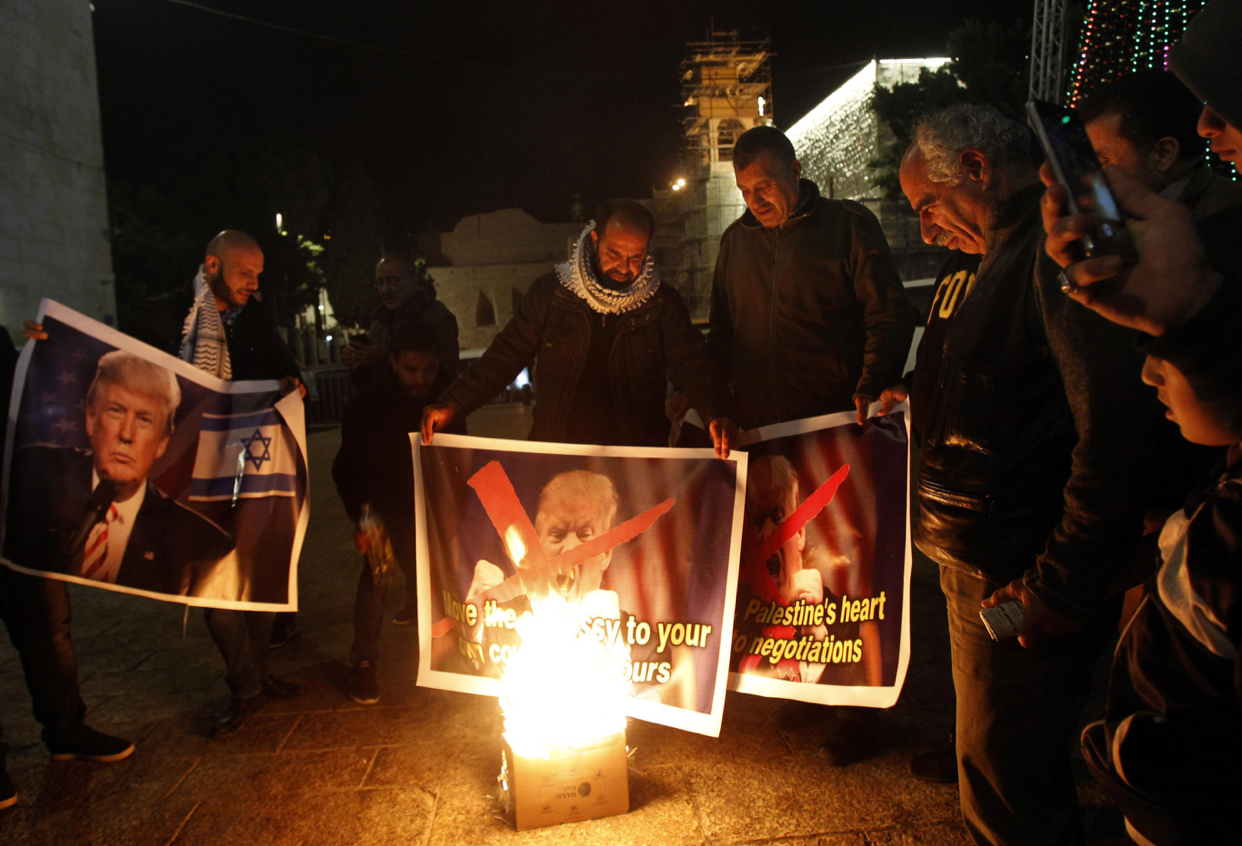 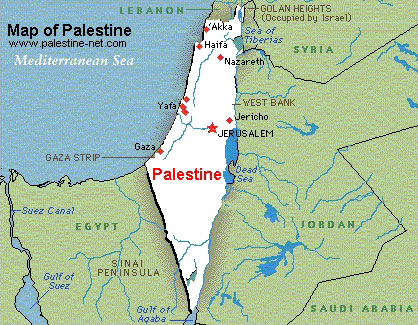 People across the globe took to the streets today burning pictures of Donald Trump in ahead of a speech in which he is expected to declare that the US no longer recognises the existence of Palestine, handing the Palestinian capital city and Islamic holy land of Jerusalem over to Israel in its entirety.

World leaders and officials including British Foreign Secretary Boris Johnson have warned the move could will further violence if not all out war and jeopardise the Middle East peace process costing the US all of its current Arab allies.

Pope Francis defended the “status quo” of the city hours before Trump’s speech, saying: “Jerusalem is a unique city, sacred for Jews, Christians and Muslims. I pray to God that this identity is preserved and reinforced, for the sake of the Holy Land, the Middle East and the whole world, and that wisdom and prudence prevail.”

Muslims recognise Jerusalem as a shared holy land between Christians, Jews and Muslim. It is also recognised that the political and national status of the city is separate from the religious status. With Palestine only claiming East Jerusalem as it’s capital.

Israel forces have however long stopped Muslims from accessing holy Islamic sites in the city.

The Hamas political party has pledged a “day of rage” (peaceful, yet passionate and noisy protests) on Friday in response to the announcement, releasing a message asking Palestinians to rise up and send a message to Israel.

Israel annexed eastern Jerusalem after winning the infamous Six Day War in 1967 but the move was not recognised by the United Nations, nor is the illegal occupation of Palestinian and Syrian lands.

Trump is also expected to order the US embassy from Tel Aviv, the official capital of Israe to Jerusalem, which he regards as he capital, but this move could take several years to push actuate.

The United States would become the first country to make the distinction since Israel was artificially created in 1948 by the USA’s corporate elite and their Europeans allies.

The city has been at the heart of constant and violent conflicts between the new state and its neighbors because it is home to key religious sites holy to Judaism, Christianity and Islam, and because the original Arab inhabitants are systematically slaughtered in ethnic cleansing campaigns.

Trump’s move would not only undermine the US administration’s fledgling effort, led by his son-in-law and senior adviser Jared Kushner, but anger the wider international community, as well as attracting a new wave of domestic threats to the US.

Russia, China and Japan have all independently verified that North Korean nuclear missiles are more than capable of “effective strikes to any part of the US mainland.” Trump needs to reduce the international tension towards him, not infuriate powerful nations further.

In recent days, the European Union, Germany and France have all implored Trump not to take action on Jerusalem.

There have been renewed calls for Trump to be banned from the UK and EU and sanctions imposed on the US.

The 57-member Organization of Islamic Cooperation said changing Jerusalem’s status would amount to “naked aggression” against the Arab and Muslim world.

The head of the Arab League said it would be a “dangerous measure that would have repercussions” across the entire Middle East.

But it would help satisfy the pro-Israel, far right, violent base that helped Trump win the presidency and also please the Israeli government, the closest US ally.

A senior US official said on condition of anonymity that the decision was not formally finalised and advisors could still change Trumps mind, although the likelihood is very slim.

Israeli security officials say they are monitoring the situation and prepared for all scenarios, the number of Palestinian civilians murdered in the streets has seen a daily rise over the past week.

Both Israel and Palestinians maintain discrete security cooperation in the West Bank that have helped prevent violence from escalating in recent years, Trump’s move is likely to end such cooperation.

Much of the violence between Israel and the Palestinians in Jerusalem and the West Bank over the past 20 years has been connected to tensions in the holy city.

The city experienced deadly riots in 1996 after Israel opened a new tunnel in the Old City.

More recently, the city experienced a wave of anti-Palestinian stabbings in late 2015 in part because of growing numbers of visits by US Jewish nationalists to the Temple Mount, the banning of Muslims from Al Aqsa Mosque and vandalism of Islamic sites in Jerusalem. Last summer, the city again experienced weeks of unrest when Israel tried to install security cameras in the Al Aqsa Mosque.

An official spokesperson with the White House National Security Council said: “We’ve nothing to announce.”

It is understood that several Middle-East Royals have already moved their multi billion dollar business assets out of the US in protest at the moves.