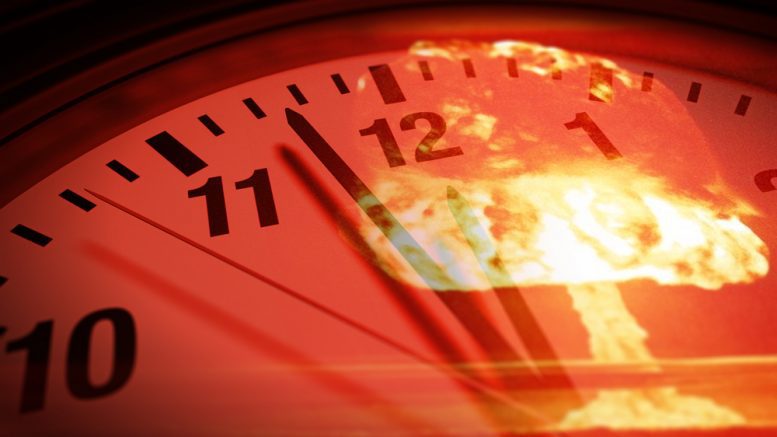 Climate change, pollution, poverty and Donald Trump have been blamed for the Doomsday Clock moving to its closest point to total global inhalation in history.

The Doomsday Clock is a symbol which represents the likelihood of a man-made global catastrophe.

Maintained since 1947 by the members of the Bulletin of the Atomic Scientists’ Science and Security Board, the Clock represents an analogy for the threat of global nuclear war.

Since 2007, it has also reflected climate change and new developments in the life sciences and technology that could inflict irrevocable harm to humanity.

It has been set backward and forward 22 times since then, the smallest-ever number of minutes to midnight being two (in 1953 and 2018) and the largest seventeen (in 1991) following the end of the US-USSR Cold War and collapse of the Berlin Wall. The relative safety was now long lived however with the outbreak of the Balkan Wars, Fall of the USSR and start of the Iraq Gulf War.

As of January 2018, the Clock is set at two minutes to midnight, due to global threat of nuclear war, the United States not being involved in any world leadership roles, climate change, poverty, biological weaponry development and Donald Trump.

This setting is the Clock’s joint-closest approach to midnight since its introduction, only matched by that of 1953 at the hight of the Cuban Nuclear Missile Crisis, Russia and US live testing long rang nuclear missiles.