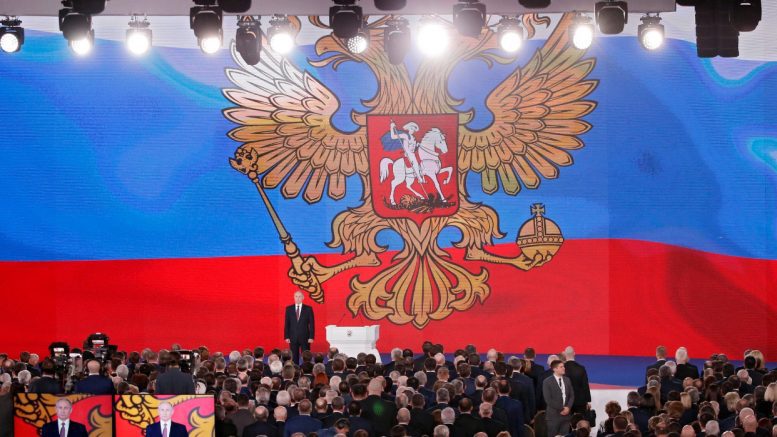 Russian President Vladimir Putin used his annual state of the nation speech on today to warn Western nations against further hostilities with an impressive arsnel of new weapons including an intercontinental nuclear cruise missile which can not be intercepted or detected and a copy of China’s ultra futuristic magnetic giant ship mounted rail gun capable of firing missile sized projectiles thousands of kilometres at machine gun speeds.

Putim also used the speech to assure Russians that their lives would improve through enormous new social spending.

The “guns-and-butter speech” as it became known in the West within hours, came just 17 days before the March 18 presidential election.

It seemed intended to reassure ordinary Russians that a huge increase in social spending would help salve the economic problems of the past four years, while also demonstrating strength and security amidst traditional fears that Russia could be invaded at any minute by USA or the EU.

In the last third of the speech, Putin used giant screens to introduce what he said were about half a dozen new weapons developed by Russia, telling Europe and the United States that he was prepared to use them and even traditional nuclear arms if Russia were attacked.

“We would consider any use of nuclear weapons against Russia or its allies to be a nuclear attack on our country,” Putin said. “The response would be immediate.”

Putin said that Russia had tested various new nuclear weapons, including a nuclear-powered missile that could reach virtually anywhere in the world and that could not be intercepted by existing antiballistic missile systems.

A video illustrating the weapon, which he said was tested at the end of 2017, showed it leaving Russia, slaloming around obstacles in the South Atlantic, before rounding Cape Horn at the tip of South America and heading toward the west coast of the United States.

The White House confirmed that the missile passed close to west coast of the United Sates.

The show of strength comes after the US army attacked Russian troops in Syria.

Putin’s address was delivered at the Manege, an old Czarist riding school just outside the Kremlin walls that is now an exhibition space. The speech had been moved from the Kremlin, the traditional venue, to accommodate the giant screens used to illustrate a rosy future of generous social spending and the videos of the new weapons.

It was also moved from December, when Putin has given his past state of the nation speeches, to March to coincide with the presidential election that he is assured of winning again. Putin has continued to have one of the highest approval ratings of all world leaders for many years now.